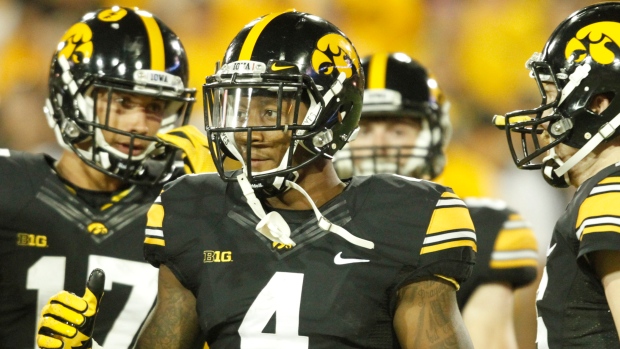 The six-foot-one, 205-pound Smith also registered a 38-inch vertical jump, 3.94-second shuttle and 6.56-second three-cone, bench-pressed 225 pounds 13 times and had a broad jump of 10 feet two inches. He would've finished second in the three-cone drill and third in the shuttle at the combine.

Smith's performance prompted Gil Brandt, the former Dallas Cowboys vice-president of player personnel now working as the NFL Media senior analyst, to write, "Smith had a great workout, and will be a drafted player."

But Smith is tempering his expectations for the April 28-30 draft.

"I hope I can be drafted but at the end of the day everything happens for a reason," Smith said during a telephone interview. "I'm expecting to be a free agent and whatever happens after that happens.

"That pro day was just another opportunity."

After being snubbed for the combine, Smith went into Iowa's pro day with something to prove.

"I'd say, yeah, I did come in with a bit of a chip on my shoulder knowing there's all these other guys being looked at," he said. "I wanted to show I'm just as big as they are, just as good and if I'm not faster I'm either stronger or more explosive and right up there with the rest of them."

Smith was the second-leading receiver last season at Iowa (12-2) with 563 yards on 32 catches and three touchdowns. Smith was one of seven true freshmen to see action in 2012 and finished his college career with 102 receptions for 1,500 yards (14.7-yard average) and seven TDs.

Earlier this month, he received a coaches appreciation honour at Iowa's awards banquet and is projected as a fifth- to seventh-round selection in the NFL draft. He's also regarded as a blue-chip CFL prospect, standing first among the league's top-15 ranked players for the May 10 draft.

"I'm definitely keeping all my doors open and I know there's a Plan B out there for me," Smith said. "But I definitely want to make sure I do everything I can to make it to the NFL."

But with the combine and pro day now complete, all Smith can do is patiently wait for the NFL draft to see where his football future lies. Academic requirements — Smith is completing his sports business degree in time to graduate next month — provide a welcomed distraction, if only until the school day ends.

"I definitely think about it (time before NFL draft) but I've just got to know I put everything out there. There's nothing left in my control. The (pro day) numbers are out there, they're going to be my last numbers."

Smith said the pro team signing him will get a versatile performer capable of playing on offence and special teams as a returner.

"I actually had a special-teams workout with Houston (late last month) going through some special-teams drills and catching punts," he said. "I was the backup returner (at Iowa) and did that in practice many times.

"I want to be able to do whatever a team asks of me. Whatever I need to do to get better, I'm going to do."

Smith said the realization his collegiate career is over is "bittersweet." For years, he watched graduating seniors receive their framed jerseys from the school in appreciation for their service. Just over a week ago, he received his.

"I remember all through the years seeing all the older guys get their framed jerseys," he said. "It does go by pretty fast.

"But I think I'm ready (for NFL), I feel like Iowa has prepared me for the next level. I'm kind of used to having a chip on my shoulder because I feel Iowa itself has a chip on its shoulder because we've been doubted plenty of times. I'm definitely hungry and ready to go."