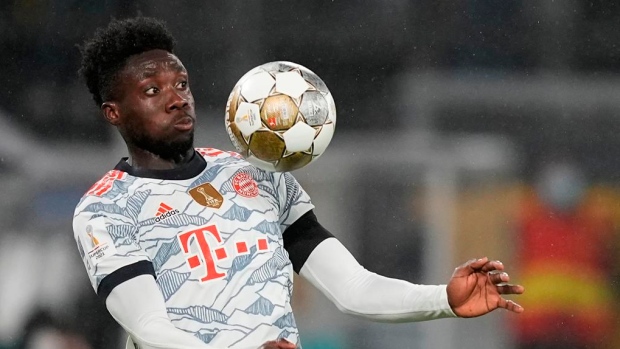 The six members of the Refugee Paralympic Team received some words of encouragement Monday from one of the world's most famous refugee athletes.

Bayern Munich and Canada soccer star Alphonso Davies, a goodwill ambassador for the United Nations High Commissioner for Refugees, said the six athletes had the power to inspire and change lives in an open letter released the day before the opening ceremony of the Tokyo Paralympics.

"Tomorrow it all begins — the greatest Para sport event on earth. Congratulations for being right at the heart of it," Davies wrote. "You might be nervous now, but that’s expected. When I play for FC Bayern Munich and Canada, I get butterflies before every match.

"Please know this: as you dive into the water, as you prepare to throw, as you step into the arena, know that you are not alone. The world is behind you, including 82 million displaced people, 12 million of whom are living with a disability. "

Davies says he can relate to what the athletes have been through. He was born in a refugee camp in Ghana to Liberian parents who fled the civil war in their home country. He was five when his family was accepted into a resettlement program that brought them to Canada, first to Windsor, Ont., and then Edmonton.

"Not everyone understands the journey you have been on. But I do and that’s an important part of what made me who I am," he said "I was born in a refugee camp. My family and I fled war. I appreciate it’s sometimes hard to talk about the past. The experiences you’ve had, the things you’ve seen, the discrimination you’ve faced.

"I’ve read your stories and learnt about the journeys you have all been through. You are the most courageous sports team in the world right now."

Davies says he will be watching when the Refugee Paralympic Team leads the athletes into Tokyo's Olympic Stadium for the opening ceremony.

"So, go out and do your thing. Do it like you’ve never done it before," Davies said. "Give it 100 per cent. Don’t focus too much on the rewards and go out there with a smile on your face, knowing you worked hard to be there. That’s when you’ll be at your best. And welcome to the show – you belong here."

The members of the Refugee Paralympic Team are:

This report by The Canadian Press was first published Aug. 23, 2021.