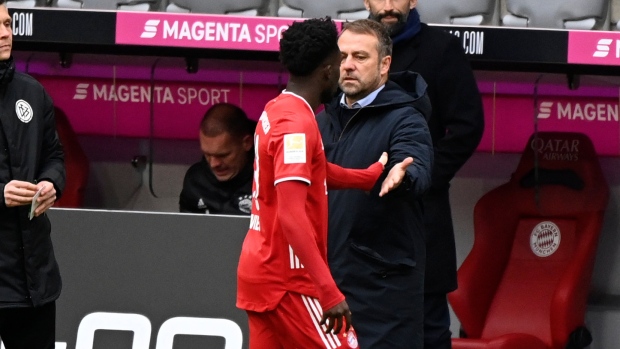 The 20-year-old fullback from Edmonton was initially yellow-carded in the 11th minute after catching Wataru Endo's foot with a challenge. A minute later, play was halted as Daniel Schlager went to the sideline to have another look at the incident on a monitor.

Returning to the pitch, Schlager reached into his pocket and produced a red.

The incident occurred off a Davies throw-in. The Canadian got the ball to Robert Lewandowski, who sent it back with Endo in chase. Davies' first touch was poor and things got worse when he lunged to retrieve the ball, catching Endo's foot/ankle with his studs.

The red card did not slow Bayern, which reeled off four goals — three by Lewandowski — in the first half at Allianz Arena. Austrian international David Alaba took over at fullback from his midfield role.

Davies will miss Bayern's top-of-the-table showdown with second-place RB Leipzig on April 3 when the Bundesliga resumes after the March international break.

Davies is expected to get another call-up for Canada next week ahead of World Cup qualifiers against Bermuda and the Cayman Islands on March 25 and 28.

The Bermuda game is officially a Canada home game but will be played in Orlando due to pandemic-related travel restrictions. The Cayman Islands shifted the second match to Bradenton, Fla., for the same reason.

Davies has won 17 caps for Canada, with five goals and seven assists.

The speedster was also sent off for a second yellow card in a Bundesliga match last June against Werder Bremen.

And he saw red in Canada’s 2-0 friendly win over Jamaica in Toronto in September 2017.

Davies, then 16, was ejected in the 75th minute for kicking out at Jamaica’s Damion Lowe after the two went down in a tangle in the corner at BMO Field. Lowe had seemingly precipitated the incident by shoving the Canadian.

This report by The Canadian Press was first published March 20, 2021.