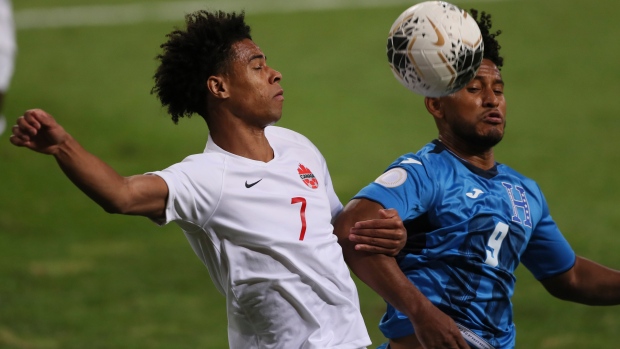 FOXBOROUGH, Mass. — Canadian international Tajon Buchanan earned another honour for his performance at the Gold Cup on Tuesday when he was named to the tournament's best eleven.

The 22-year-old from Brampton, Ont., had already been named winner of the tournament's Best Youth Player award, following in the footsteps of 2017 winner Alphonso Davies.

Buchanan played both wingback and in a more attacking role for Canada, tormenting defenders with his speed and ability on the ball.

"This exciting 22-year-old attacker thrilled onlookers with his playmaking, including a superb solo effort to give Canada their goal in the 2-1 semifinal defeat to Mexico," CONCACAF said in a statment.

Buchanan was the only Canadian to make the all-star team, which also featured three Americans and three Mexicans.

The young Canadian, in his third season with the New England Revolution, has been linked to interest from European teams.

"Obviously it's a huge goal of mine. Hopefully one day I can play overseas," Buchanan said Tuesday in a virtual availability. "With all the rumours and stuff like that, it's a lot to take in.

"But I kind of just cancel all of that out, let my agent do his job and just try to keep performing every time I get on the field. I'm focused on what happening right now and that's our game (Wednesday)."

In the wake of the tournament, Buchanan said he had been racially abused on social media.

"Those who personally know me know that I typically prefer to keep to myself, but I'm not going to pretend I didn't see the racial abuse I've received," Buchanan, who is Black, wrote in a social media post. "Crazy the world we live in and all I can say is we as a society must do better."

Asked Tuesday, Buchanan said he was disappointed to see the abuse after scoring his first senior international goal in Canada's loss to Mexico last Thursday at the CONCACAF Championship.

"Not anything that any player wants to go through or any person honestly," he said Tuesday.

"Thanks to all the support and love that I did receive, from a lot of people back home and here in the United States," he added.

Asked if his team planned to acquire a player before the window closes, New England coach Bruce Arena was coy.

"Anything's possible but I wouldn't bet on it."

Arena, a former U.S. national team coach, said Canada and Qatar both surprised him at the Gold Cup.

"I thought Canada played extremely well. I was very impressed with their team," he said.

The U.S. won the CONCACAF championship, defeating Mexico 1-0 in the final. Qatar, a guest entry, lost to the U.S. in the semifinals.

This report by The Canadian Press was first published Aug. 3, 2021