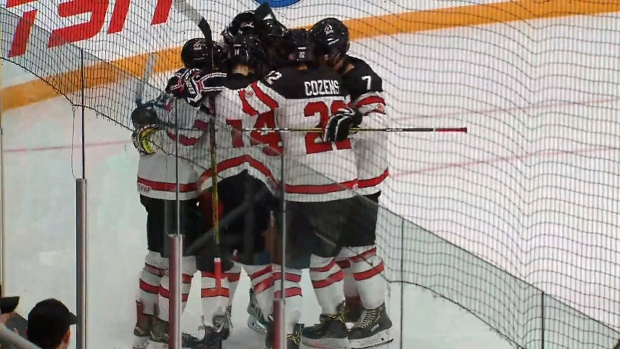 It was the first and only tuneup for both teams before the under-18 event begins Monday in Edmonton and Red Deer, Alta.

Canada faces Switzerland in its opener in Edmonton. The Swiss lost 7-0 to Russia in an exhibition game Saturday in Lacombe, Alta.

"(The game) had a good pace to it with a lot of intensity," said Cozens.

"They want to beat us and we want to beat them, so we were both going as hard as we could. This is just our first time playing together and we're getting used to each other. We're confident going in to this tournament and I think we'll be a good team."

Radek Muzik and Matej Tojman scored the other goals for the Czech Republic.

In other pre-tournament games on Saturday, Sweden beat Finland 4-3 in a shootout in Penhold, Alta., and the United States crushed Slovakia 10-4 in Sylvan Lake, Alta.

The event has been in the Czech Republic and Slovakia for the past 21 years. Canada hosts the tournament this year as well as in 2020 and 2022.

Canadian teams have won gold 21 of 27 times at the event.