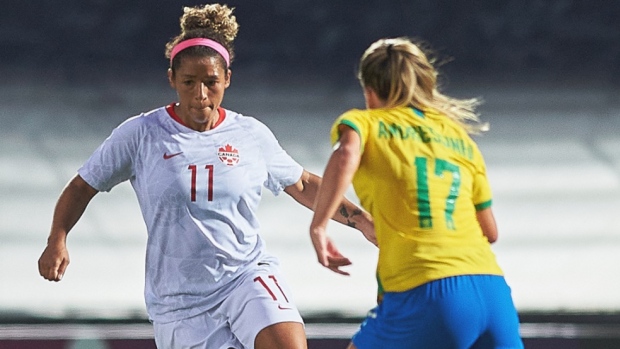 It was a better showing from the Canadian women than in their 0-0 draw Friday against the 27th-ranked Czech Republic at the same venue, an empty Estadio Cartagonova. Canada moved the ball quickly and created chances, albeit without converting.

"I thought we were a lot more dangerous," said Priestman. "I think we deserved the win … Overall I thought it was a really great effort from the players on the pitch. They put in a massive shift. Brazil are very hard to defend against. And to keep a clean sheet, I can't stop saying we've got to celebrate that."

Canada, which has not scored in its last 184 minutes, came close in the 85th minute only to see Shelina Zadorsky's header off a corner hit the goalpost. A Brazilian shot went just wide soon after.

Priestman noted the Canadians had conceded eight goals in their previous three matches (0-2-1) against Brazil.

"So if I look at the positives, we've taken a step forward in being a much harder team to beat," she said.

Still, the Canadians need to be more clinical in front of goal.

"I think it's going to come," said Priestman. "I know I sound like a broken record but I've had 29 players in camp. That's a lot of players on a training pitch and that can sometimes affect partnerships, where you don't put players together in the same team al the time. I'll be able to do that leading into an Olympic Games.

"But absolutely I think we definitely need to be more clinical."

Priestman now has to choose her 18-woman Olympic roster, plus four alternates.

She will reconvene her roster at the end of the month, looking to squeeze in one more friendly before the Games. Canada blanked No. 6 England (2-0) and No. 23 Wales (3-0) in April.

The eighth-ranked Canadian women open the Tokyo Olympics on July 21 against host Japan before facing Chile and Britain. No. 7 Brazil is in a group with China, the Netherlands and Zambia.

While Priestman wants to finalize her roster as soon as she can, she says she needs to do the due diligence, saying "I'm dealing with players' dreams to be in the Olympic Games."

The key in reviewing team footage will be choosing the right blend, she said. "Then I have to have those difficult conversations."

Priestman says she got answers to most of her questions during the two friendlies and camp in Spain.

"To be fair to the players, they maybe posed a few more questions to me as well," she said. "They put their best foot forward and that's all you can ask for.

"So I think I'm close but, like I said, I need to zoom out a little bit and take the emotion out of it … I've just to be objective and make the right decision that I feel for Canada."

The Canadians are now 8-9-8 against Brazil, a record that includes a 2-1 Canada victory in the bronze medal match at the 2016 Rio Olympics.

Priestman made seven changes to the team that tied the Czechs, with only captain Christine Sinclair, Kadeisha Buchanan, Nichelle Prince and Jessie Fleming retaining their place in the starting 11.

Kailen Sheridan started in goal behind an experienced backline of Ashley Lawrence, Buchanan, Zadorsky and Allysha Chapman. Desiree Scott, Jessie Fleming and Quinn, who goes by one name, were in the midfield with Sinclair, Prince and Deanne Rose up front.

With the exception of veteran keeper Stephanie Labbe and the injured Beckie, it probably represented Priestman's elite starting unit with a total of 1,077 caps going into the match. Sinclair earned cap No. 299.

Sheridan, making her 11th senior appearance, was the only member of the starting 11 to have fewer than 50 caps.

It was an entertaining back-and-forth first half.

The teams each had a shot on target in the first 10 minutes, easily handled by the 'keepers.

Sinclair and others appealed unsuccessfully for handball in the 22nd minute when a Quinn header off a Canadian corner appeared to go off a Brazilian arm. Marta dispossessed Lawrence soon, after bodying the fullback to the ground, and drove towards the Canadian penalty box, only to see her shot blocked by Buchanan.

The Brazilians began to find space down the flanks with Beatriz and Debinha coming close. At the other end, Brazilian 'keeper Barbara came well out of her penalty box in the 37th minute to get to the ball with Deanne Rose charging her way.

A Canadian free kick proved nervy late in the half when Barbara's clearing punch only sent the ball to a Canadian. But the ensuing shot was blocked in a congested Brazilian penalty box.

Barbara was much better in the 44th minute, reaching high to parry away a looping Fleming shot from distance.

Barbara made a fine one-handed, close-range save off Quinn in the 54th minute when a Brazilian clearance went right to the Canadian midfielder at the far post. Quinn had a more difficult chance off the ensuing corner, sending their shot high.

The Brazilians had a scary moment soon after when a defender's pass back to Barbara was a little of target and rolled slowly towards the open goal before the Brazilian 'keeper chased it down.

Sheridan, making her first start for Canada since suffering a thigh injury in February at the SheBelieves Cup, had a solid outing.