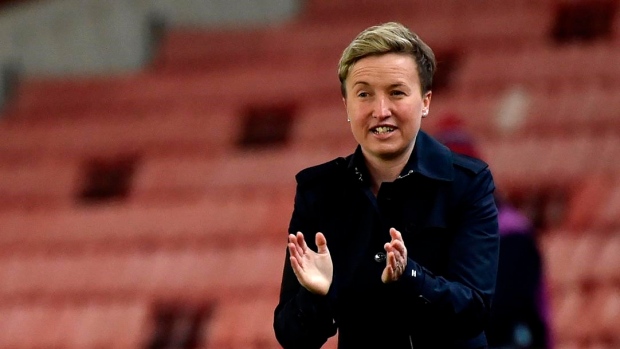 Relaxed and upbeat, the Canadian women's soccer team finishes off camp in California this week before leaving for Japan on Thursday.

"I feel like we're getting some real work done, on the pitch, off the pitch," coach Bev Priestman told reporters Monday. "So so far (it's been) really really good. I feel like we're moving forward. The group feels great. There's a great culture.

"When you have less players, there's a better connection. And so far it's been brilliant."

The eighth-ranked Canadians will be based in the Chiba Prefecture, southeast of Tokyo, before heading to Sapporo for the July 21 opener against No. 10 Japan. They then play No. 37 Chile on July 24 and Britain on July 27 in Group E play.

Canada is looking to return to the podium after winning bronze medals in both Rio in 2016 and London in 2012.

The Canadian women will play a warmup training match in Japan behind closed doors against a top-10 team which Priestman did not identify. She also plans an intrasquad scrimmage in California before the team flies to Japan.

The coach said the group is enjoying the camp in California given there are no matches attached to it.

"It's been a packed schedule from a game perspective," she said, referencing past camps in Florida, England and Spain this year. "It's been like three games, two games in every (international) window. For me, this L.A. leg is chance to sort of breathe, work on us, not be focused on someone else."

Unlike last month's camp in Spain, which came before the Olympic roster was announced, Priestman says the time in California has been a relaxed affair.

"The staff and players have been involved in games, team connection activities. I think it's just a really enjoyable group to be around. I know that they love being around each other. There's a genuine excitement. You feel that on the pitch, off the pitch. And that's only going to build."

She says that connection is the "X-factor" for the Canadian team.

But Priestman is taking nothing for granted. Citing Chile's 0-0 draw with No. 2 Germany last month, the 35-year-old English native said no match in the women's game is a given.

"But I do get excited when I watch all three opponents about what we can do," she said of the Group E opposition.

The players have used camps in Spain and California to adjust to the heat expected in Japan, training their bodies to take on more fluids than normal.

"Everything we're doing is designed to basically help us the best we can in Japan," said Priestman. "I think we've adapted well … Those little things that can make all the difference, we're going after everything."

The team got a boost with news that FIFA is going to allow the four travelling alternates each entry is allowed to be incorporated into the full squad. Previously the alternates could only come into play in case one of the 18-woman main roster was injured.

Now Priestman can use goalkeeper Erin McLeod, midfielder Sophie Schmidt, fullback Gabrielle Carle and striker Jordyn Huitema as she wants, although she still will only be able to dress 18 for matches.

"Having all of those players available, you get to manage one-game injuries, you get to pick on form in the tournament based on training et cetera," she said. "It's fantastic it happened."

Striker Janine Beckie has recovered from the injury that forced her to leave the recent camp in Spain. Quinn, a midfielder who goes by one name, is also doing well after a minor niggle.

Priestman believes her team's "really good, tight-knit culture" will serve it well in Japan given the tight restrictions due to COVID-19.

"So I think they'll adapt and I do think that the teams that do adapt well in this tournament could do really well. And they've shown me they can do that."

This report by The Canadian Press was first published July 5, 2021.