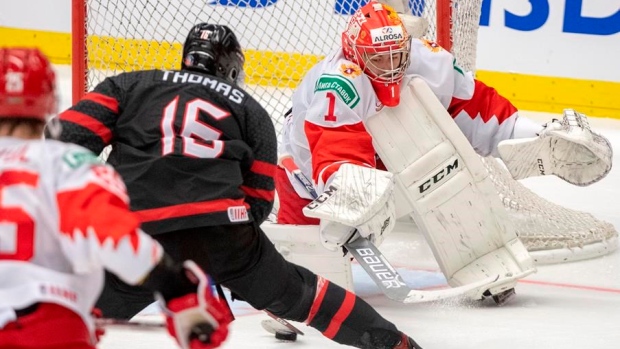 The Moncton Wildcats showed this week they are serious about chasing the Memorial Cup.

Director of hockey operations Ritchie Thibeau proved as much by orchestrating five separate deals, including a blockbuster for defenceman Jared McIsaac ahead of the Quebec Major Junior Hockey League's trade deadline, upgrading a Wildcats team currently ranked No. 6 in the 60-team Canadian Hockey League.

"This year we feel we have a team that can go all the way, that's why we added a few pieces," said Thibeau. "We feel we're in a good position, a few breaks and hopefully we can get to the Memorial Cup.

"If we added a few pieces, we could really become a contender."

Thibeau acquired forward Benoit-Olivier Groulx — Canada's final cut from its world junior roster — from Halifax on Dec. 22, but wasn't done there. He followed up with a trade on Jan. 2 for Tampa Bay Lightning forward prospect Gabriel Fortier from the Baie-Comeau Drakkar, then made another deal with the Mooseheads on Monday for McIsaac, who recently returned from the world junior championship with a gold medal around his neck.

Thibeau says the locker room is full of excitement heading into the homestretch of the season after the additions of Groulx, Fortier and McIsaac to a roster already consisting of forwards Alexander Khovanov, Jakob Pelletier and Jeremy McKenna, along with Canadian world junior goaltender Olivier Rodrigue.

"There's lots of enthusiasm, they know we're serious about going as far as we can. They appreciated that, especially the guys in their last year," said Thibeau.

Gold-medal winners were a hot commodity this week, with four players from Canada's world junior squad returning home to find themselves on a new team.

Forwards Raphael Lavoie and Dawson Mercer were acquired by the QMJHL's Chicoutimi Sagueneens in separate deals. Lavoie, an Edmonton Oilers prospect, was dealt to the Sagueneens by Halifax for four draft picks including a first rounder, while Mercer cost Chicoutimi six draft picks, including three firsts, which were shipped to the Drummondville Voltigeurs for the NHL draft-eligible winger.

Forward Akil Thomas, who scored the winner for Canada in its 4-3 victory over Russia for gold, was moved at the Ontario Hockey League trade deadline, going from the Niagara IceDogs to the Peterborough Petes for a player and four future draft selections.

"He is capable of playing in all situations, has played in big games, and comes through in big moments," said Petes general manager Michael Oke. "He'll be heavily counted on in Peterborough as we move forward in the second half and into the post-season."

In all, Thibeau traded 12 combined draft picks and a player just for Groulx, McIsaac and Fortier.

"We know we have to give up something but we try and balance the draft picks with the present," said Ritchie. "It's a balancing act. We aren't totally risking the future."

Moving an abundance of draft picks for a Memorial Cup run after the CHL Christmas break is not uncommon, especially with a team's window of opportunity to win being so small. And using those picks to acquire returning world junior players has become the norm.

Thibeau says he had his eye on Groulx and McIsaac since November as potential trade targets but wasn't sure if the Mooseheads were going to become sellers. But Halifax, last year's Memorial Cup host and runner-up, decided it was time to restock the shelves following a six-game losing streak in mid-December and move on from its core group.

Thibeau knows there will be an adjustment period with six new players on Moncton's roster, but believes the talent can get the team over the hump.

"It's not just playoff experience, they have big-game experience. National team players, Memorial Cup. We thought it was a benefit getting (Groulx and McIsaac). We play them seven, eight times a year so we liked what they brought to the table."

While the Wildcats and Sagueneens, No. 4 in the CHL rankings, were the biggest dealers in the QMJHL, the Rimouski Oceanic also made a splash by acquiring forward Justin Bergeron from Rouyn-Noranda for a player and five draft picks.

The OHL's Oshawa Generals were also busy leading up to the trade deadline.

After shipping out forward Serron Noel, a Florida Panthers prospect, to the Kitchener Rangers for a package including four draft picks, the Generals then swapped nine draft picks to the Niagara IceDogs for forward Philip Tomasino, who was taken 24th overall last year by the Nashville Predators. Oshawa also bolstered its net by getting Jordan Kooy from the Sarnia Sting for three draft picks.

The Western Hockey League hasn't seen as many big names as the CHL's other two leagues being moved around as of Thursday afternoon. But Regina Pats general manager John Paddock made a trade, sending his nephew and goaltender Max Paddock to the Prince Albert Raiders.

This report was first published by The Canadian Press on Jan. 9, 2020.