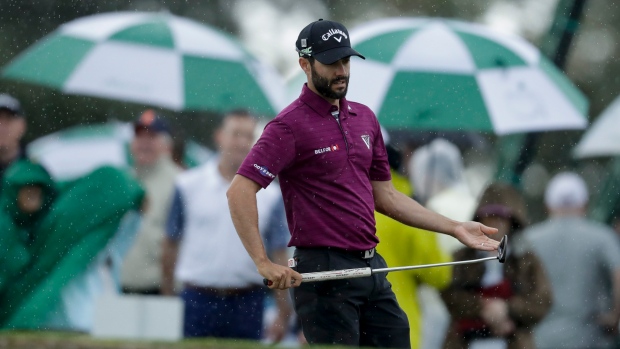 Winds gusted as high as 50 kilometres per hour, and temperatures hovered around 13 C as Augusta National took its pound of flesh on the field after day one of the 2017 Masters.

Team Canada did not have the day they hoped for, but after a hard fight and a show of Canadian spirit; they are still very much a part of this year's Masters.

Mike Weir described round one as "The hardest I've seen Augusta National since 2000."

Weir opened with a four over par 76, but showed great resilience, paring his final seven holes to stay in reach of the leaders.

The other two Canadians (both newcomers), Adam Hadwin and Mackenzie Hughes, couldn't have picked a more difficult day to make their competitive debuts at the Masters.

When Hadwin got to the 15th hole the wind was peaking. "I hit driver and three wood, and I still had 115 yards," he stated with a look of shock while he spoke in his post round interview about a hole that usually allows for eagle and birdie opportunities.

Hadwin was the low Canadian at three over par, right in the hunt heading into Friday. If there's one thing we can take from Hadwin's season so far on the tour it’s that he is not scared to go low. He shot a 59 on Saturday at the CareerBuilder Challenge, becoming the 1st Canadian to break 60 on the PGA Tour, proving Hadwin's ability to find a low round when needed.

Hughes has the most work in front of him as we head into the second round – a triple bogey eight at the Par 5 15th hole put him to eight over par. He responded with a birdie at 17, and a great par save on the final hole to remain optimistic for round two. Hughes suggested that with the loss of Monday's practice time, and the washed out conditions on Wednesday due to severe rain, there was not much you could have done Tuesday to prepare for such an extreme and challenging day.

Friday's forecast is a slight improvement, but still calls for a challenging day before seasonal temperatures arrive for the weekend and the winds quiet down.

The task at hand for team Canada may be slightly uphill after round one. However, what is just as certain as the challenge ahead is their positive attitude and desire to still make a statement at this year's Masters.