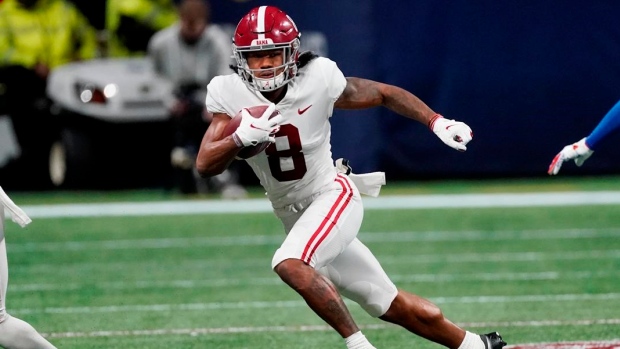 There have always been Canadians competing in American college football.

For a time, you could find the odd Canadian offensive or defensive lineman on an NCAA roster, maybe the occasional linebacker, or a kicker or punter.

But the stars of the game were never Canadians, especially at the big programs featured on national television every Saturday.

Canadians instead tended to be either specialists or complete physical freaks, the most notable being former Michigan State offensive lineman Tony Mandarich. The Oakville, Ont., native was one of the highest-rated offensive linemen in the history of the sport but ended up an NFL bust after being drafted second overall by the Green Bay Packers in 1989.

The smattering of Canadians who did excel at the skill positions – Ottawa’s Jesse Palmer (quarterback) at Florida, Vancouver’s Jerome Pathon (wide receiver) at Washington or Montreal’s Tim Biakabutuka (running back) at Michigan– were more blips than indicative of a larger trend.

That has started to change in recent years, with more and more Canadians taking starring roles at big-time NCAA programs.

Most prominent of them is Alabama receiver John Metchie, slated to be the No. 1 receiver on the top-ranked team in the nation after hauling in the second most yards for the Crimson Tide last season and the fourth most in the entire SEC.

Over the past two years, four of Metchie’s former teammates at receiver have become first-round picks in the NFL – Henry Ruggs III, Jerry Jeudy, Jaylen Waddle and DeVonta Smith. That’s exactly where Metchie is expected to land next spring if he continues the trajectory that he established during his sophomore season in Tuscaloosa.

Metchie began his football journey playing in Brampton, Ont., eventually moving to Maryland and New Jersey for high school in search of better coaching and competition, plus increased visibility to NCAA schools.

It’s a path more and more young Canadian football players are taking, just as they began to do in basketball a generation earlier.

Last season, Metchie got to play against his Brampton minor football teammate, receiver Josh Palmer of Tennessee, who became a third-round pick of the NFL’s Los Angeles Chargers.

Palmer also finished high school in the U.S., as did Clemson receiver Ajou Ajou of Brooks, Alta., who is poised for a breakout sophomore season with the Tigers.

There are undoubtedly more young Canadians fixated at an early age on playing NCAA football, something clear in the reflections of players like Dallas Cowboys defensive tackle Neville Gallimore, who was born in Ottawa and starred at Oklahoma.

That’s leading to players taking training more seriously and seeking opportunities to be seen through provincial teams or visits to NCAA camps while they are in high school.

Not every Canadian had had to pull up roots in high school to get to the NCAA, in part because technology allows college scouts from anywhere access to see a player’s abilities.

The greatest example is Chuba Hubbard, the Sherwood Park, Alta., native who earned a pile of scholarship offers while playing high school football in Edmonton before landing at Oklahoma State.

Hubbard not only won the No. 1 job for the Cowboys, but he also led the nation in rushing in 2019, a once unfathomable feat by a player straight from a Canadian high school.

So, can we safely say the latest wave of Canadians in NCAA football is indicative of a trend?

When Chase Claypool goes from starring at Notre Dame to a great rookie season with the Pittsburgh Steelers, Nathan Rourke rewrites the quarterback record book at the University of Ohio, and Metchie is the No. 1 receiver on the top team in the nation, it sure feels like something has changed.

If this generation can seed the next, the impact of Canadians at U.S. schools will continue to grow.

That’s going to mean more Canadians breaking through to the NFL, with the CFL being the happy beneficiary of more young Canadians aspiring to play the game at the highest levels.

There simply weren’t many U.S. college football role models for young Canadian players a generation ago, like when CFL great Jon Cornish arrived at the University of Kansas in 2002.

Cornish, a B.C. native, was a rarity – a player who set records as a running back in Kansas before having his bust enshrined in the Canadian Football Hall of Fame in Hamilton.

Also on display at the hall is the Jon Cornish Trophy, awarded annually to the top Canadian in NCAA football.

Although the award has only been around since 2017, it’s become very competitive in a short amount of time.

It’s another sign of the talent this country is producing and another honour for the next generation to shoot for.