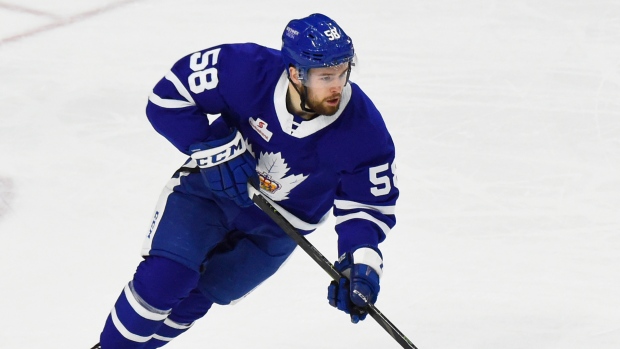 After that, everything's a bit of a blur.

The winger scored his third goal of the night at 7:29 of overtime as the Toronto Marlies defeated the Charlotte Checkers 4-3 on Thursday to even the American Hockey League's Eastern Conference final at two games apiece.

"I think I kind of blacked out there," said Carcone, who also added an assist for a four-point performance. "Sometimes you don't believe it, but it was definitely a good feeling."

Jeremy Bracco also scored for the Marlies, while Kasimir Kaskisuo made 29 saves.

Andrew Poturalski, with a goal and an assist, Julien Gauthier and Jesper Sellgren replied for the Checkers. Alex Nedeljkovic stopped 24 shots.

Game 5 of the series goes Friday back at Coca-Cola Coliseum.

Acquired by the Toronto Maple Leafs from the Vancouver Canucks in December's trade for Josh Leivo, the 22-year-old Carcone has worked his way up to the organization's top line in the AHL alongside Bracco and Chris Mueller.

"He was playing real good hockey for us through the tail end of the regular season," Marlies head coach Sheldon Keefe said. "You see when he does move his feet like today, he's a pretty dominant player and tough to slow down."

The winner of Toronto-Charlotte will take on either the San Diego Gulls or Chicago Wolves in the Calder Cup. San Diego leads that series 2-1.

Carcone scored his third goal in an back-and-forth extra period, snapping his sixth of the playoffs off the rush through the five-hole past Nedeljkovic.

"That's big time," Bracco said. "This is why you put on the gear when you're five, six years old.

"It's an honour to play alongside him."

Tied 1-1 after two periods, Sellgren gave Charlotte — the Carolina Hurricanes' AHL affiliate — its first lead 68 seconds into the third when he wheeled in the offensive zone and fired a shot off the far post and in past Kaskisuo with the teams playing 4 on 4.

Toronto responded at 5:07 when Carcone scored his second of the night on a deflection of Jesper Lindgren's weak point shot.

Poturalski, who leads the AHL playoffs in scoring 17 points, restored Charlotte's advantage with a shortside effort at 5:07 on a power play.

But Bracco got the Marlies back even at 3-3 with 8:44 left in regulation on a spinning backhand from near the goal line that fooled Nedeljkovic through the five-hole.

"It was a lot like our season," Keefe said of the third period. "We've found our way to this point. We're a team that really up until the last month of the season, we weren't even certain we were going to make the playoffs."

With both Maple Leafs general manager Kyle Dubas and head coach Mike Babcock looking on from a private suite, Toronto coughed up a 1-0 lead at 3:40 of the second when Kaskisuo gave the puck away behind his own net on a Marlies power play to Nicolas Roy, who quickly fed Gauthier in front.

Carcone had a chance to get the home side back in front later in the period, but Nedeljkovic stopped the winger on a partial breakaway.

Charlotte, which won a league-high 51 games in the regular season, kept coming and had Toronto on its heels as the second wore on. Gauthier forced a toe stop out of Kaskisuo after stepping around and drawing a penalty on Marlies defenceman Andreas Borgman before Morgan Geekie rang a shot off the post.

Toronto, which won the 2018 Calder Cup, opened the scoring late in a physical first when Carcone's shot deflected in off Checkers defenceman Josiah Didier, who had been battling with Marlies forward Mason Marchment in front of Nedeljkovic.

"It's so important for us to enjoy the moment," Keefe said of Toronto's journey up to now. "We've come so far as a team, so just give yourself every opportunity to have fun and enjoy it."

They'll get another chance Friday on home ice.

Note to readers: This is a corrected story. A previous version had the incorrect time for the winning goal.