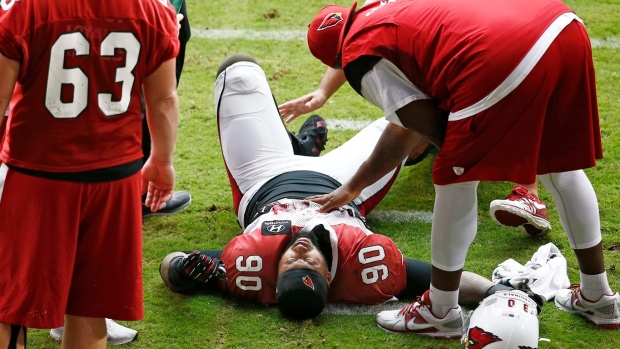 The move gives the 33-year-old Dockett the chance to find out his fair market value before the free agency signing period begins March 10. He could well wind up re-signing with Arizona, the only team he's known in his 11 NFL seasons.

General manager Steve Keim said that the Cardinals "have been very clear about our feelings for Darnell and our desire to have him back.

"After speaking with him and his representatives, we decided that this move today makes the most sense for both the team and the player and allows each to keep all of its options open."

Dockett missed all of last season after tearing his right MCL in training camp. Before the injury, he had missed only two games during his NFL career.

He was drafted in the third round out of Florida State in 2004, the same year the Cardinals selected Larry Fitzgerald in the first round. Fitzgerald recently signed a restructured two-year, $22 million contract. The release of Dockett leaves Fitzgerald as the longest-serving player on the Arizona roster.

The two sides couldn't agree on what Dockett's value was, so allowing him to look elsewhere will determine at least what other teams are willing to pay and whether re-signing with Arizona is his best option.

Dockett was due to make $6.8 million next season, a figure that was too high for the Cardinals considering his age and the fact he's coming off a serious knee injury.

The sometimes brash and always colorful lineman was the emotional leader of the Cardinals' defence, voted captain by his teammates four times. He tied the Super Bowl record with three sacks in Arizona's loss to Pittsburgh in 2009. Dockett had 75 tackles and nine sacks, both career highs, in 2007.