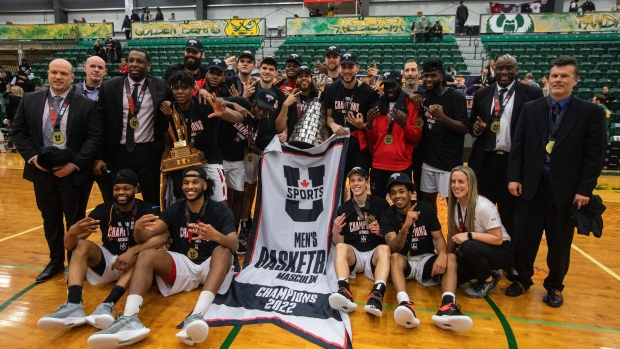 EDMONTON — The Carleton Ravens defended their U Sports men's basketball crown with a victory in the championship game Sunday.

Third-year guard Aiden Warnholtz had 18 points, nine rebounds and eight assists to lead the Ravens past the Saskatchewan Huskies 85-72.

The Ravens have now won three consecutive titles and 16 overall since 2003.

Lloyd Pandi had 16 assists and 13 rebounds, and Alain Louis added 15 points for Carleton.

“This one means more," said Louis, who was named tournament MVP. "They ranked us No. 7, and that gave us extra fuel. I’m really proud of the guys. We fought hard for this one.

"We played Carleton basketball. Everybody has a role, and I’m so proud of this group.”

Alexander Dewar scored a game-high 27 points in defeat for the eighth-seeded Huskies, which saw their improbable run to a championship come to an end.

Saskatchewan was looking for its first title since 2010.

The Huskies led early in a tight first quarter before the Ravens took control of the game in the second. Carleton was up 45-31 at halftime and 65-46 after three quarters.

The Ravens started the third quarter on an 18-0 run.

"We fell down early and had to battle back," said Ravens head coach Taffe Charles. "And I think that woke our guys up a bit. The Huskies played a heck of a game, and they battled tonight.”

This report by The Canadian Press was first published April 3, 2022.