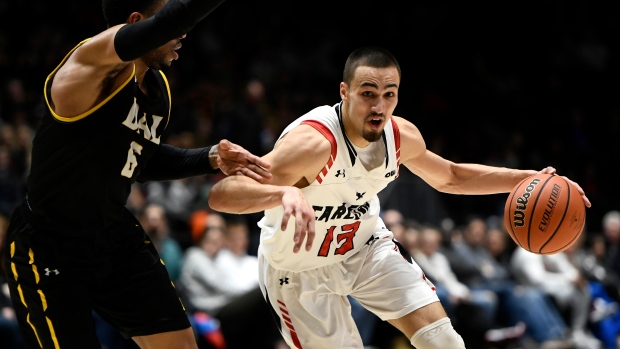 OTTAWA — When Taffe Charles was an assistant under Dave Smart, he remembered winning a national championship and thinking they would never win another.

He couldn't have been more wrong.

Charles led the No. 1 Ravens to a victory over No. 2 Dalhousie Tigers 74-65 in Ottawa on Sunday night to win their second straight U Sports men's basketball title. With the victory, Carleton has won nine of the last 10 national titles and 15 overall, the most in Canadian university history.

Charles is the first coach to ever lead both a men's and women's program to a national championship. He coached the Ravens to a women's title in 2018. He became the men's coach after Smart stepped down from the role March 19, 2019.

"In 2002 I remember telling Dave (Smart) after we got a ring, 'Man we're never going to get another one of these again.' It was just so difficult. And here we are years later it's 15," said Charles.

The Ravens were down 12 points at halftime but staged a furious comeback. They outscored Dalhousie 26-18 in the third quarter and the pro-Carleton crowd was on its feet heading into the final frame.

Charles said his team was calm, but frustrated at halftime.

"We talked about being together for the whole game. Sometimes we blow people out and it seems easy, but it's just not that easy. We've been in closer games and understood when things don't go your way," said Charles. "We had to keep going, keep fighting, keep playing. It's 40 minutes and we're a good team."

It was back-and-forth through the fourth, but the Ravens pulled away after a three pointer from fourth-year guard Munis Tutu put Carleton ahead for good.

Tutu had 14 points while Isiah Osborne added 12 and was named the tournament MVP.

Osborne credited his teammates for his individual success during the Final 8.

"My team, they're the best. They push me every day in practice. When I get out there, they trust me and I trust them. They put me in a good spot to have success," said Osborne. "I shoot the shots they give me, and they were falling this weekend."

Biniam Grebrekidan led the Ravens to gold with 19 points. Grebrekidan, a second-year forward, is from Alymer, Que. — about 15 minutes from Ottawa's downtown.

He said the win, at home, would be an unforgettable experience.

"It was one of the best experiences of my life to be honest," said Gredbrekidan. "Having my friends and family here and be able to celebrate with them is phenomenal."

Alex Carson led all scorers with 20 points for the Tigers in a losing effort.

"I knew our team would keep fighting until the end," said Carson. "We battled to the end and I'm really proud of this team."

Dalhousie was attempting to win its first-ever national title.

Up until Sunday the Tigers had only lost one game all season — by just one point — but Carleton's defence smothered Dalhousie for just 11 points in the fourth quarter.

"First half we did what we were supposed to do, the second half we didn't," said Tigers coach Rick Plato, the U Sports coach of the year.

Plato said Carleton is a championship-winning team for a reason, and they played like it in the final frame.

"You have to play 40 minutes and unfortunately we maybe played 32," said Plato. "But credit Carleton, they're a great team and they proved it today."

Carleton dominated their U Sports competition all year. They lost only one game — and also by just one point.

"It hasn't sunk in really right now. I'm just very fortunate to be put in this position," said Charles. "It's a crazy ride, but it's about the players. The players got it done and I'm proud of them."

Earlier Sunday the No. 3 UBC Thunderbirds defeated the No. 5 Western Mustangs 99-82 to win the bronze medal.