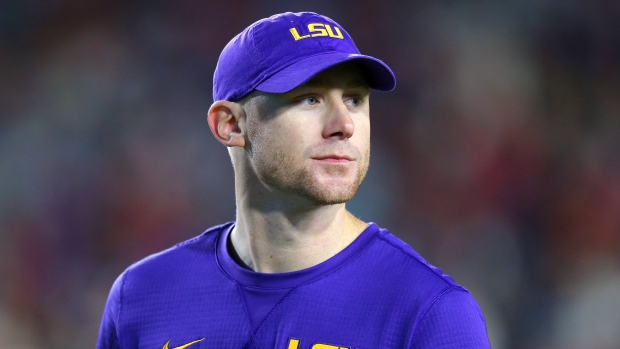 CHARLOTTE, N.C. — The Panthers are hoping Joe Brady can bolster a sagging offence like he did at LSU.

Carolina officially announced Thursday that Brady will be their new offensive co-ordinator after one year as LSU's passing game co-ordinator. Brady won the Broyles Award given annually to the top assistant coach in college football after helping the Tigers to a 15-0 season and a national championship.

LSU finished first in the nation averaging 568.5 yards and 48.4 points per game on offence.

“To win a national championship with all the hard work those players put in and to be able to call yourself a champion at the college level – that's something they can't take away from you,” Brady told the team's website Thursday. "And now here I am in Charlotte representing the Panthers. It's hard to put into words. But I'm really excited for the future."

Behind Heisman Trophy winning QB Joe Burrow, the Tigers finished second in passing offence with 401.6 passing yards per game. Burrow completed 76.3% of his passes to lead the nation and set a new FBS single-season record with 60 passing touchdowns. Burrow's 65 total touchdowns are also an FBS record.

Before joining LSU, Brady spent two seasons as an offensive assistant with the New Orleans Saints.

He helped the Saints win back-to-back division titles while finishing third in the NFL with 911 total points scored in those two seasons. With Brady on the staff, quarterback Drew Brees posted a cumulative passer rating of 109.5 over those two seasons, second-best in the NFL.

Before the Saints, Brady spent two years as a graduate assistant at Penn State from 2015-16. He started his coaching career at his alma mater William & Mary, coaching linebackers from 2013-14.

In Carolina, Brady inherits an offence with uncertainty at the quarterback position. Cam Newton is rehabbing from an foot injury, and his status with the team remains unclear. The Panthers can clear $19 million if they trade or release Newton.