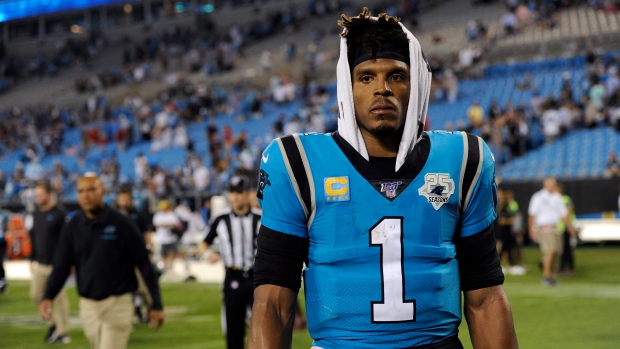 "Cam has meant a lot to this organization and the Carolinas," Panthers GM Marty Hurney said. "Everyone saw his performances on the field. I had the privilege of seeing how hard he worked off the field, and his commitment to this team when no one was watching. He's the ultimate competitor and it physically hurts him to lose. He willed this team to victory on many occasions and will always be considered one of the greatest players in the history of this franchise. His contributions to this team, this community and the game of football will leave a lasting impact on our organization."

The #Panthers tried to send Cam Newton to the #Bears and #Chargers. They found no takers and at this point, no starting jobs available. Release was the only option. Carolina has just $2M in dead money with this release, but Cam is now free.

Prior to his release, Newton had a physical in Atlanta with both his foot and shoulder "checking out well," per ESPN's Adam Schefter.

Cam Newton had a physical in Atlanta yesterday coordinated by the Panthers and his agency team, per sources. Newton passed the physical and is healthy, per source, with both his shoulder and foot “checking out well and he is hungrier than ever and eager for the next opportunity.”

The 30-year-old quarterback was limited to just two games in 2019 because of a foot injury. The year before that he threw for 3,395 yards and 24 touchdowns compared to 13 interceptions.

Newton has spent the last nine seasons under centre in Carolina after being selected No. 1 overall by the team out of the University of Auburn in the 2011 NFL Draft.