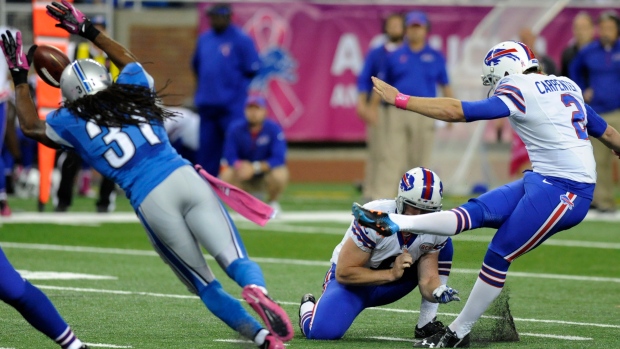 DETROIT - Bills kicker Dan Carpenter responded to an alleged laser pointer shining from the stands in Detroit with laser-point accuracy.

After banking a 50-yard attempt off the left upright in the third quarter, Carpenter split the goal posts from 58 yards with 4 seconds left for a 17-14 come-from-behind victory over the Lions on Sunday.

"I hit it really good. It was one of those things I really like to not leave opportunities like that short," said Carpenter. "I hit the ball really well, a lot better than I did on the 50-yarder."

And this time, there wasn't a laser shining in holder Colton Schmidt's face, as apparently happened on the earlier miss.

The Bills filed a complaint with NFL security officials after both Schmidt and quarterback Kyle Orton said that someone in the stands was shining a laser pointer at them.

Without going into detail, coach Doug Marrone said the issue was resolved before the game ended. In fact, Marrone said, the laser was less of a distraction than it was a motivator.

"We felt that Dan could do it," Marrone said. "At that point, with the adrenaline and everything, he was fired up."

NFL spokesman Michael Signora said the league was waiting for its security representative in Detroit to file a game report. The Lions said in a statement that they were aware of the reports and contacted NFL security regarding the issue.

The Bills (3-2) snapped a two-game skid in Orton's debut as Buffalo's starter after EJ Manuel was benched this week. And their defence had six sacks in delivering co-ordinator Jim Schwartz a win in his return to Detroit after being fired as Lions head coach last season.

The Lions were undone by placekicking. Alex Henery missed all three field goals attempts, including a 50-yarder that sailed wide left with 21 seconds remaining.

Coach Jim Caldwell was already hinting of being ready to make another switch at kicker two weeks after Henery was signed to replace rookie Nate Freese.

"It's a performance-based league, plain and simple, and you have to perform," Caldwell said. "Anyone that doesn't, we take a look and see if we can improve that one way or another."

Receiver Calvin Johnson did not return after aggravating a right ankle injury in the first minute of the third quarter. Starting running back Reggie Bush didn't finish the game after also hurting his ankle.

Johnson was hurt when he reached down to make a 7-yard catch and was immediately hit low by cornerback Leodis McKelvin. Johnson clutched his right ankle and was briefly treated on the field. He then got up and slowly walked off the field.

Caldwell called the hit as "a pretty good whack," but said it was too early to determine the severity of the injury.

Golden Tate picked up the slack with seven catches for 134 yards and a 9-yard touchdown catch. The Lions' defence assisted the offence, with cornerback Rashean Mathis returning an Orton interception 41 yards for a score.

Quarterback Matthew Stafford went 18 of 31 for 221 yards with a touchdown and interception.

Orton bounced back from a slow start and the interception.

"It wasn't the first and it won't be my last," said the 10-year journeyman who improved his career record to 36-35, including a perfect 5-0 against Detroit. "You've got to keep that trigger, and put a little bit more pressure on yourself to make the plays next time."

He finished 30 of 43 for 308 yards with a 2-yard touchdown to Chris Gragg. And he set up the decisive score by hitting rookie Sammy Watkins over the middle for a 20-yard gain. The ball was thrown behind Watkins, but he reached back with his right hand, tipping the ball forward and making the grab.

Defensive tackle Marcell Dareus had five tackles and a career-best three sacks. He had several reasons to be motivated. He wanted to step up with fellow starter and mentor Kyle Williams sidelined by a knee injury. And then he wanted to win for Schwartz.

"It really meant more to him than just a game," said Dareus. "We all took it to ourselves to go out and do the best we could for Schwartz and for the team, and just pull it out."

NOTES: Bills RB Fred Jackson followed Gragg's touchdown with a rush for the 2-point conversion that tied the game with 9:23 left. ... Orton won a game for the eighth time when tied or trailing in the fourth quarter or in overtime. ... The Lions have allowed 16 sacks in the past four games. ... Detroit's kickers have hit just 4 of 12 field-goal attempts.