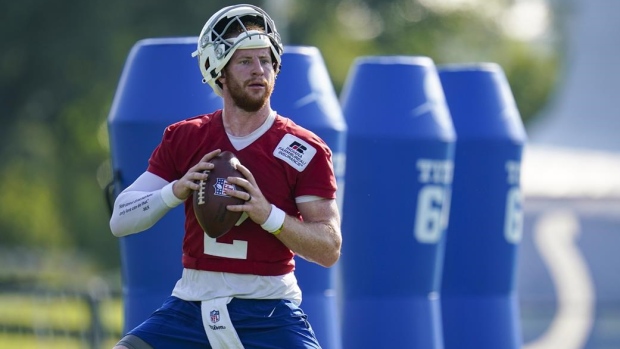 One of the most interesting things to look forward to every National Football League season is how the new arrivals will fare with their new teams.

Will a change of scenery reignite a career that has gotten stagnant? How will the future Hall of Famer perform while wearing a new uniform for the first time? Is the addition of a new star the final ingredient for a perennial contender to finally get over the hump?

Many of these questions are lingering as we enter Week 1 of the NFL season.

Let’s look at the most notable faces in new places and what it could mean going forward.

Carson Wentz will look to reignite his career in Indianapolis this season following the retirement of Phillip Rivers.

The Colts acquired the 28-year-old quarterback from the Philadelphia Eagles back in March in exchange for a 2021 third-round pick and a 2022 conditional second-round pick.

Indianapolis is breathing a sigh of relief after it was originally thought Wentz would miss five to 12 weeks after suffering a foot injury on just the second day of training camp. But, thankfully for the AFC South contender, that initial prognosis seems to be inaccurate as Wentz has already returned to the practice field and is expected to start in Week 1 against the Seattle Seahawks on Sept. 12.

Wentz looked like a mainstay in Philadelphia after the Eagles selected the North Dakota State product second overall in 2016. He was an integral part of Philadelphia’s run to their first league title in nearly six decades in his sophomore season back in 2017 despite missing the playoffs with an injury.

Wentz took a step back in 2018 and was forced to the sidelines once again late in the season due to injury, handing the ball off to backup pivot Nick Foles for the postseason.

Fresh off signing a new four-year deal with the Eagles prior to the 2019 season, Wentz was finally able to stay healthy for a full regular season, leading Philly to the playoffs with a 9-7 record. In his playoff debut, Wentz suffered a concussion in the first quarter of the NFC Wild Card game as the Eagles fell to the Seahawks.

The 2020 campaign was when things really turned sour for the native of Raleigh, N.C. With the Eagles sitting at 3-8-1 and Wentz struggling behind centre, the fifth-year quarterback was benched for second-round pick Jalen Hurts in Week 13 and didn’t see any action for the rest of the season. Wentz finished with 2,620 yards with 16 touchdowns, 15 interceptions and 50 sacks taken. The picks and sacks led the NFL at season’s end despite Wentz only playing 12 games.

The writing was on the wall as Philadelphia made it clear they would be going forward without Wentz in the fold, and he was dealt to the Colts shortly after.

Now the question is, will the change in scenery help Wentz rekindle his Pro Bowl form of 2017? First, of course, he needs to stay healthy in Indy, but it will be interesting to see what he can do in a new uniform. 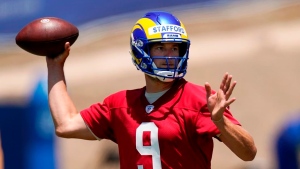 Stafford looks to get the Los Angeles Rams over the hump, while Goff will attempt to improve the Detroit Lions’ 5-11 record from a year ago.

In March, Detroit acquired Goff, a 2021 third-round pick and first-round picks in 2022 and 2023 in exchange for the veteran Stafford.

Detroit hasn’t had a Week 1 starter behind centre that wasn’t named Matthew Stafford since 2009. Over a dozen seasons with the Lions, Stafford was only able to lead the NFC North club into the playoffs three times, two of which were with 9-7 records. They lost in the first round each time.

It’s safe to say Goff, a two-time Pro Bowler and 2016 first-round pick, will have his hands full in Detroit. Goff will lead an offence that was ranked third-last in rushing yards per game last season, meaning the 26-year-old will likely have to air it out in 2021.

On the other side of the aisle, the Rams are just two seasons removed from having one of the best offences in football, making it all the way to the Super Bowl before falling to the New England Patriots.

After missing out on the playoffs the following year in 2019, the Rams were back in last season, losing to the Green Bay Packers in the divisional round.

Overall, Goff hasn’t been able to reclaim his Pro Bowl form of 2017 and 2018, so the Rams decided to go a new direction. They hope the 33-year-old Stafford can lead them to a divisional title in the very strong NFC West.

Stafford will have plenty of talented options to throw to, including Robert Woods, Cooper Kupp, and off-season pickup DeSean Jackson.

This season will determine the short-term winners of the Stafford-Goff swap.

Will Fuller (Texans to Dolphins)

The 2020 season was an up and down for Will Fuller.

Fuller was the No. 1 wide out in Houston for the first time following the departure of DeAndre Hopkins to the Arizona Cardinals, and the 27-year-old had a career year. However, that season was cut short after he was handed a six-game suspension in late November for violating the league's policy on performance-enhancing drugs. Fuller says he was taking a prescribed medication that he thought was legal.

Despite missing the final five games, Fuller record career highs in receptions (53), yards (879) and touchdowns (eight) over just 11 games. The suspension hurt the Notre Dame product’s wallet come free agency, as the best he could land was a one-year, $10.6 million with the Miami Dolphins.

Heading into another contract year with a promising young pivot in Tua Tagovailoa behind centre, Fuller has potential for a breakout 2021 season in South Beach.

Fuller will miss the opening game of the season due to the suspension. 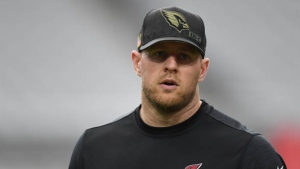 Last off-season it Hopkins leaving the Texans for the Cardinals. This year it was the three-time Defensive Player of the Year.

Defensive end J.J. Watt requested a release from the only franchise he’s ever known following a trying 4-12 campaign. The Texans granted that release, and Watt proceeded to sign a two-year pact with the Cards worth $28 million.

The 32-year-old Wisconsin product is coming off a season where he was able to play the full 16-game schedule for just the second time in the past five years. Watt recorded 52 total tackles with five sacks and one interception for a touchdown.

Arizona allowed 125.5 yards on the ground last season. If Watt, a five-time Pro Bowler who last received the honour in 2018, can stay healthy, it could go a long way for the Cardinals’ playoff outlook after finishing .500 in 2020.

At the very least, it’s going to take some time before seeing Watt in an Arizona uniform feels normal. 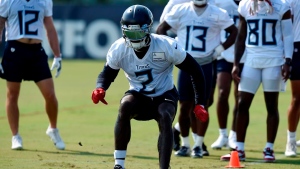 Julio Jones is another veteran superstar who has a new home in 2021 after a falling out with the only organization he’s ever know.

The Falcons traded the 32-year-old wide receiver to the Tennessee Titans in June after a season hampered by injuries and rumours he wanted out after a decade in Hotlanta.

Despite only playing nine games, Jones still racked up 771 yards receiving and three touchdowns. It marked the first time in six years that the seven-time Pro Bowler didn’t record 1,000 yards receiving. In fact, his lowest total over the previous six years was in 2019, when he recorded 1,394 yards.

At the end of the day, if Jones is healthy, he still has the potential to be one of the best wideouts in the game.

The 11-5 Titans from a season ago were the second-best rushing team in the NFL as powerhouse Derrick Henry helped them run for 168.1 yards per game. Their passing game, on the other hand, ranked 22nd.

With A.J. Brown on the path to get even better in his third year as a pro and now Jones in the mix to complement, the defending AFC South champions will have Super Bowl aspirations on their minds in 2021.

It’s hard to believe Patrick Mahomes could get any better, but that might happen with the addition of two-time Pro Bowl left tackle Orlando Brown Jr.

In April, the Kansas City Chiefs acquired Brown Jr. and two draft picks from the Baltimore Ravens in exchange for four picks, most notably KC’s first rounder in 2021.

That big expense means the 25-year-old will be tasked with protecting Mahomes’ blind side.

If Brown Jr. can keep Mahomes comfortable and protected all season long, a second MVP and Super Bowl title might in store for the 25-year-old gunslinger.

The Chiefs will also benefit from the eventual return of Canadian guard Laurent Duvernay-Tardif, who sat out the 2020 campaign to help with the fight against COVID-19.