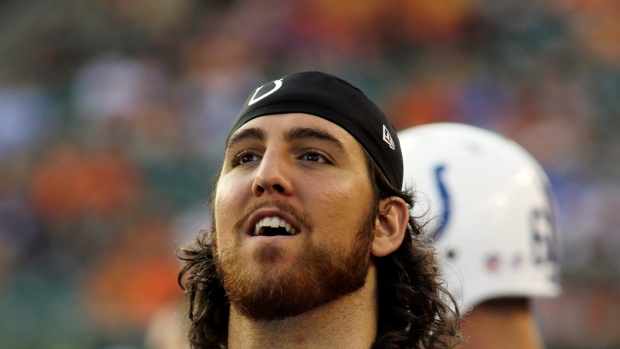 INDIANAPOLIS - Anthony Castonzo walked into the Colts' locker room Friday with a big smile, a new contract and a familiar attitude.

All that money didn't change a thing.

Less than 24 hours after Indianapolis' left tackle agreed to a dream contract — four years, $43.6 million — Castonzo went back to work on the one mission that matters most, protecting Andrew Luck.

"Basically I just said, 'Hey, it's all up to you (agent Tom Condon). I'm focusing on playing football. I've got an important season ahead of me, so get it done as soon as you can get it done,'" Castonzo said. "I knew I wanted to be here so I was hoping we could get something done."

Now that the deal is done, the Colts have the cornerstone for an offensive line that has spent most of the past two years in flux.

During that time, Indy has used 18 lineup combinations and Luck has been hit a league-high 210 times, according to STATS.

The 6-foot-7, 311-pound tackle from Boston College has been one of the few constants. Castonzo has made 56 consecutive starts and played in a league-high 1,090 regular-season snaps last season. Against the Patriots, Castonzo even caught a touchdown pass from Luck and celebrated the score with a memorable arm-waving dance.

But Castonzo has never been one for flashy moves. He'd rather do the dirty work as just one of the guys.

"I take pride in the fact that I protect Andrew's back," he said. "When I go out there playing, it's not just playing with my teammates, it's playing with some of my best friends."

Castonzo wasn't the only one having some fun Friday.

Luck knows two key teammates — Castonzo and Pro Bowl receiver T.Y. Hilton — have been locked up for four and five years, and coach Chuck Pagano is relieved that he won't have to worry about speedy rushers coming off the left edge.

Getting the deal done before Sunday's season opener at Buffalo also gives the Colts time to prepare for what another busy off-season at the negotiating table.

Team owner Jim Irsay has repeatedly said he wants to sign Luck to a long-term extension that will make him one of the richest players in league history. Tight ends Dwayne Allen and Coby Fleener, starting linebacker Jerrell Freeman and starting cornerback Greg Toler are all set to become free agents, too, if the Colts cannot re-sign them before early March.

While Irsay has shown he's willing to pay big money to keep his top players, it's not likely all four will return.

First, though, there's a regular season to play and the two-time defending AFC South champs have become a trendy pick to reach the Super Bowl.

But the Colts know their most likely route to Santa Clara, California, will be keeping Luck on his feet -- a job that falls heavily on Castonzo.

"Getting paid doesn't change at all what the game is on the field," Castonzo said. "I'm just going to go out there with the same mentality I have been."

Notes: Pagano said Toler (neck) and running back Vick Ballard (hamstring) would not play against the Bills. Darius Butler is expected to replace Toler in the lineup. ... Linebacker Robert Mathis and rookie cornerback D'Joun Smith are both listed as questionable. Mathis, the 2013 sacks champion, is trying to come back from a season-ending torn Achilles tendon. Smith has an undisclosed injury. ... Linebackers Nate Irving (knee), D'Qwell Jackson (toe) and Bjoern Werner (knee) and cornerback Sheldon Price (concussion) are all probable. ... Indy also traded a 2017 conditional late-round draft pick to Cleveland for defensive lineman Billy Winn.