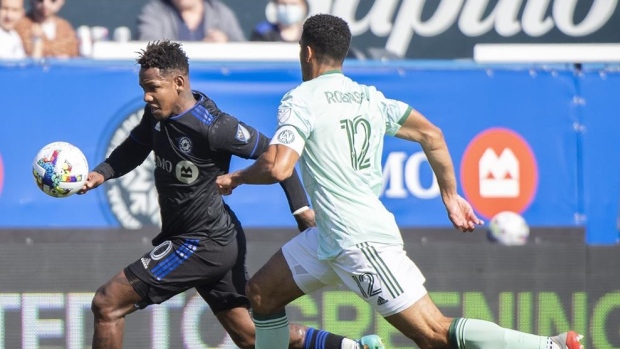 MONTREAL — A late header from Joaquin Torres was enough for CF Montréal to claim a 2-1 win against Atlanta United in Major League Soccer action Saturday afternoon.

The win moved Montreal into fourth place in the Eastern Conference and extended its unbeaten streak to six games in MLS, tying a franchise record.

“It’s good that the guys found a way to win today,” said head coach Wilfried Nancy. “There are tricky games against very good teams that are always difficult to navigate but I’m happy that they found a way to get a good result from it.”

Kamal Miller put in a Man of the Match performance scoring for Montreal (4-3-2) while Marcelino Moreno scored for Atlanta (3-3-3).

Montreal has made a habit of starting games strong at home and today was no different. Less than five minutes in, the pressure yielded a free kick for Djordje Mihailovic. Miller rose above his defender and opened the scoring with his first of the season, meeting Mihailovic’s cross at point-blank range.

“It’s about time that Kamal put it between the sticks,” joked Mihailovic. “I know that [Miller] needed this type of game. He showed up with the right attitude from the start and the goal and assist were just the cherry on top.”

Following the goal, Montreal appeared to sit back and invite pressure from Atlanta, conceding 73 per-cent possession in the half — the most they’ve allowed all season by a large margin.

The pressure invited dangerous chances and, just after the 10-minute mark, a free kick from Thiago Almada forced a diving save from Montreal keeper Sebastian Breza.

Almada then came back a few minutes later with a shot from distance that almost found the top corner.

“I didn’t like the shape we had defensively. They had the ball in the middle a lot and we couldn’t find a solution to block that space,” said Nancy. “We didn’t have the ability to make two or three passes in a row, so we just defended.”

Atlanta continued to press their advantage in the second half, pinning Montreal back and dictating the pace of the game. It didn’t take long for them to find success when Moreno found some separation in the box and fired a shot in off the post only six minutes after the restart.

The early equalizer was enough to wake Montreal up and it immediately replied with a golden opportunity that forced a goal-line clearance from defender Andrew Gutman.

“I felt that even against a really good team we settled into possession, and we knew that we could score goals on them,” said Nancy. “It’s been a couple games now that we’re in a really good place physically, meaning we can push harder towards the end of the game.”

That pushing finally paid off with less than ten minutes to play. As Montreal continued to press for a go-ahead goal, Miller followed up a genius bit of dribbling with a cross that found the head of Torres to the delight of the vocal Stade Saputo crowd.

In the first game of their unbeaten run, Montreal threw away a two-goal lead in the final minutes to a ten-men Atlanta. This time, when Atlanta once again pushed for the equalizer, it was met with a much more composed defensive unit.

“We’re finally getting over that slow start. We’re defending with more urgency and more communication,” said Miller. “It’s not only the back three and Breza. Everyone’s buying into team defending and it’s helping us win these games.”

Both sides are back in action on May 7 when Montreal hosts Orlando City SC while Atlanta continues its road trip against Chicago Fire FC.