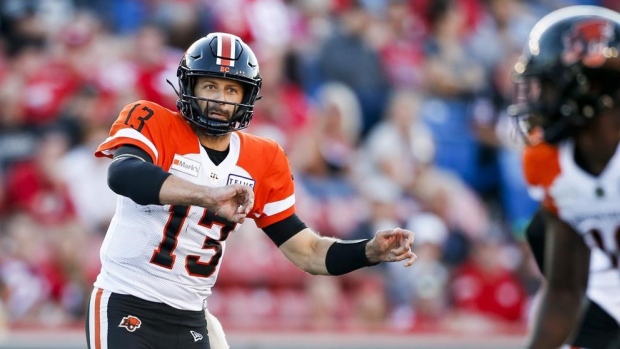 CALGARY — A game-time decision to start for the B.C. Lions on Thursday, quarterback Mike Reilly led his team to a 15-9 win over the Calgary Stampeders.

Leading up to the game, all signs pointed towards rookie Canadian QB Nathan Rourke getting the start for the Lions.

"All the way up until warmups I was thinking that Nathan’s playing and if Mike plays that’s a bonus," said B.C. coach Rick Campbell, who noticed that Reilly had better control of the ball during warmups so decided to start the veteran. "That he played a whole game is actually quite a bonus that he was able to make it through the whole thing. Hopefully he keeps getting better."

Reilly completed 26-of-33 passes for 342 yards and ran for a one-yard touchdown as the Lions (1-1) bounced back from a Week 1 road loss to the Saskatchewan Roughriders.

"To be able to come in there and get a win is huge," said Reilly, who’s nursing an injury to his elbow on his throwing arm. "It felt great early in the game. Certainly late in the game, it started to tighten up a little bit and things like that, but at that point none of that really matters."

Takeru Yamasaki kicked a pair of field goals and a single for B.C., while James Butler ran for a two-point convert.

Looking to rebound from an opening week loss at home to the Toronto Argonauts, the Stampeders (0-2) had trouble all game generating offence against the Lions and had to settle for three field goals by Rene Paredes. Calgary hadn’t lost two straight games to start a season since 2009.

"We can’t fault our effort," said Calgary coach Dave Dickenson. "It’s not enough in pro sports. I get it. They’re still playing hard. It’s just not a good quality product at this time. All I can say is we’ve got to put our heads down and start getting better as a team. Tonight wasn’t a great performance from any group. We hung in there, but that’s just not good enough."

Nursing a calf injury, quarterback Bo Levi Mitchell went 21-for-38 for 290 yards. He also threw four interceptions – for the first time in his CFL career – and the Stamps turned the ball over on downs once.

"I think they had a good front," Mitchell of B.C.’s defence. "They did a good job getting pressure at times. I kind of ruined some drives there that we had.

“We’ll go look at it together and just learn from our mistakes and learn from the things that are causing the bad plays and just continue to find a way to right this ship.”

After going two-and-out on their first drive, the Lions had much better success marching down the field the second time around as Reilly completed four straight passes to four different receivers to get deep into Calgary territory.

Unfortunately for the Lions, they had to settle for a single as Yamasaki missed a 22-yard field goal wide to the left.

The Stamps then threatened to score on their next drive as Hergy Mayala hauled in a 14-yard catch from Mitchell, before the Calgary QB tossed a 35-yard strike to Richie Sindani for a big gain. After running back Ka’Deem Carey was brought down just short of a first down, the B.C. defence stood tall and forced the Stamps to turn the ball over on downs.

"This defence is looking real scary," said Lions’ defensive back Marcus Sayles, who had five tackles and an interception. "A lot of offences should be watching out for us. A lot of guys made plays. I’m proud of them."

Yamasaki booted a 20-yard field goal as time expired in the first quarter to put B.C. up 4-0 before Paredes responded with a 48-yard kick through the uprights at 2:02 of the second quarter to get the Stamps on the scoreboard.

Reilly then capped off a six-play, 75-yard drive at the five-minute mark of the second by plunging into the end zone for a one-yard run.

"It’s been a long time since I’ve been in the end zone,” Reilly said. “The big boys up front did what they needed to do. It was a big pile of bodies, so I didn’t really get to stand up in the end zone with the ball. Somebody had already smacked it out after they had signalled the touchdown, but I don’t really have much celebration dance going on anyhow, so it was fine."

Butler scampered three yards across the goal line for a two-point convert to give the visitors a 12-3 lead.

Calgary had a great chance to get back in the game in the third quarter when Royce Metchie forced a fumble by B.C. receiver and former Stampeder Lemar Durant. Jonathan Moxey recovered the ball on the B.C. 40-yard line, but two plays later Lions linebacker Bo Lokombo picked off an errant pass by Mitchell to end the threat.

The Stamps managed to put together an eight-play, 51-yard drive late in the third quarter and into the fourth, but had to settle for another 48-yard field goal by Paredes.

After Yamasaki kicked a 29-yard field goal to give the Lions a 15-6 lead, the Stamps marched into the B.C. red zone once again, but the drive ended when KiAnte Hardin leapt in the air to pick off a pass by Mitchell in the end zone that was intended for Mayala.

"That was amazing,” said Reilly of Hardin’s athletic pick. “Our defence played phenomenal.”

Paredes kicked his third field goal of the game, from 20 yards out, with 2:47 remaining on the clock to pull the Stamps within six points.

The Stamps had one last chance to win the game on the final play of the game, but Mitchell couldn’t find an open receiver in the end zone on his desperation toss from midfield.

This report by The Canadian Press was first published Aug. 12, 2021.