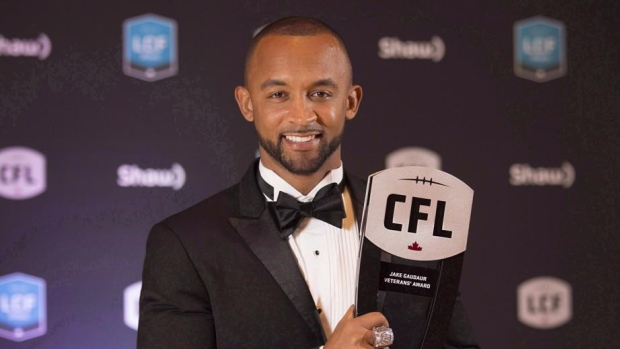 TORONTO — Matt Black calls it a step in the right direction.

The Toronto Argonauts' veteran defensive back fully supports the legalization of marijuana in Canada. Recreational pot use becomes legal across the country starting Wednesday.

The issue of marijuana use isn't a big deal in the CFL. It tests only for performance-enhancing substances and not recreational drugs like cannabis.

"That, to me, is so much bigger than the game of football but I think it's a step in the right direction," Black said. "I think there's a lot of energy and money going into the criminalization and locking people up through marijuana that's really unfortunate and unnecessary.

Marijauna remains on the World Anti-Doping Agency's banned-substance list. A CFL spokesman said the league is expecting little to no change with the drug's legalization in Canada.

"Like many businesses and employers, we are working to assess the potential impact of the legalization of marijuana later this month," the spokesman said in an email. "This is uncharted territory, of course, but at this point it appears the effect on the CFL will be minimal."

The CFL and its players will begin talks this off-season on a new collective bargaining agreement. The spokesman added the league will continue testing only for performance-enhancing drugs.

"We expect all of our employees, those working in our business offices as well as those who compete on the field, to act responsibly and in compliance with the law," the spokesman said. "That obviously includes not coming to work impaired from any substance.

"We have faith our employees will display that sort of common sense. Medical marijuana has been legal for several years. The use of any medication is a matter between physician and patient. The league would not interfere in that relationship."

But Jonathan Hefney, a former defensive back who played six years with Winnipeg, Calgary and Montreal before suffering a career-ending neck injury in 2015, told the Winnipeg Free Press last weekend a huge majority of CFL players use marijuana.

"I guarantee there's 90 to 95 per cent of those boys smoking weed out there," Hefney said. "I know our meeting room used to have a good smell to it.

"Say when we do the whole-team room, you know who the smokers are because they're all in the same section. Everybody just did their thing and it was on the low. I don't know if it's all a secret still but the players, they know who smokes or not."

For many players, marijuana is a much more favourable pain remedy than possibly addictive prescription drugs. Veteran Toronto tackle Chris Van Zeyl, in his 10th CFL season, sees many benefits to the new legislation.

"I honestly don't know anything about marijuana but I know it helps many people," said Van Zeyl. "I think medicinally it will allow us to explore those remedies a little further and hopefully we can use it for the right things.

"There are many other evils in this world we permit and we create boundaries around them. The legal aspect of it, I trust the government will do the right thing."

Running back Ricky Williams spent the '06 CFL season with the Argos while serving an NFL suspension for a fourth violation of its substance abuse policy. He was suspended multiple times during his NFL tenure for marijuana use.

The former Heisman Trophy winner, who retired from football for good in 2011, has advocated for the legalization of marijuana in the U.S. In April, Williams launched his own line of marijuana-based products called Real Wellness by Ricky Williams.

Although he played just one season in Canada, Williams had a lasting impact upon the league. In November 2006, then commissioner introduced the Ricky Williams rule, which prevented a player suspended by the NFL from playing in the CFL.

But it was grandfathered so players already in the league like Argos tackle Bernard Williams — who was suspended by the NFL for drug use and didn't seek reinstatement when the ban ended — could continue playing here.

Recently, the CFL has suspended players for using steroids, D-amphetamine and methylenedioxyamphetamine, a psychedelic hallucinogenic drug closely related to ecstasy. But it did nothing last off-season when Duron Carter, then a receiver with the Saskatchewan Roughriders, received two separate marijuana possession charges.

Carter said marijuana is a hot-button topic among CFL players.

"We had this discussion in the locker room actually . . . guys are on both sides of the fence," Carter said. "I think people need to be responsible.

"Just because all of a sudden it's legal that doesn't give you the where-with-all to be crazy or do anything that you wouldn't normally do."

Carter also praised Canada for being a progressive country.

"Canada is one of the most forward-thinking countries I've been in," said Carter, in his sixth CFL season. "Canada has always been a step ahead and I think this is another step ahead in providing people a service to help them."

But Black offered a different perspective.

"In certain areas yes we're progressive but in other areas we're really not," he said. "We're saying we're going to legalize marijuana but people still aren't responsible enough to go to the corner store and buy alcohol on a Saturday afternoon."