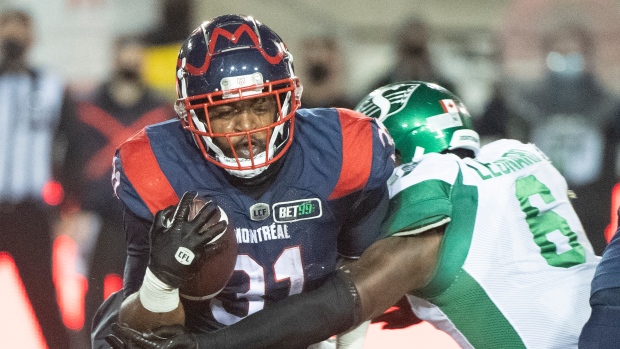 This week, he takes a closer look at both the Eastern and Western semifinals with the CFL playoffs set to get underway on Sunday.

The Hamilton Tiger-Cats managed to do what no other CFL team could this season – stop William Stanback.

And for good measure, they did it twice.

In two games this season, the Tabbies held the league’s top running back to a total of 99 rushing yards and an average of 4.1 yards per carry.

Stanback had a monster season for the Montreal Alouettes, racking up 1,176 yards on the ground and winning the rushing title by more than 300 yards.

For his efforts, Stanback was nominated as the East Division’s representative for the CFL Most Outstanding Player award.

With all of that being said, I expect Stanback to finally break loose against the Ticats on Sunday afternoon. In turn, this will help with opening up the passing game for Trevor Harris.

Harris has adjusted quickly in Montreal and has vastly improved his red zone play since moving from Edmonton.

This season with the Elks, Harris found the end zone on just four of 11 trips inside the 20-yard line (36 per cent success rate).

Conversely, the veteran CFL signal-caller has led the Als to seven touchdowns on his 10 red zone attempts (70 per cent).

All seven of those TDs were passing scores from Harris, with three going to Eugene Lewis and two apiece to Jake Wieneke and Reggie White Jr.

The instant connection Harris has formed with his receivers is what will keep this game close with the Als setting their sights on advancing to the Eastern Final down the road in Toronto.

Trevor Harris will be thrilled to have Eugene Lewis back in the lineup and so, too, will CFL fans with a keen eye on props for the Division semifinals. Harris’ passing total is valued far too low yet again this week. And considering he has his full complement of receivers, the yardage totals should climb accordingly.

Out west, the Saskatchewan Roughriders are starting to gel together at just the right time.

Prior to their Week 16 loss at Hamilton where they rested many notable starters, the Riders were rolling on a four-game winning streak.

All four of those victories were by margins of five points or less and this tough Western matchup against the rival Calgary Stampeders will be no different.

Home field advantage will be key in this one and I expect the Mosaic faithful to give the Riders the added push they need to come out victorious.