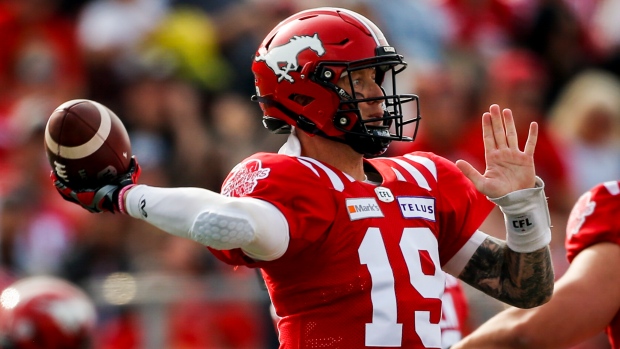 This week, he takes a closer look at how key injuries at the quarterback position have created a couple of mismatches that can be exploited.

Ahead by a Century

Mitchell clinched his 78th career CFL win in just his 100th career start in his return to the lineup for the Calgary Stampeders.

That’s the most wins by any quarterback through his first 100 career starts in CFL history.

The legendary Doug Flutie is second on that list with 72 wins in his first 100 starts.

This week, the Stampeders will head to Hamilton, where Bo has a perfect 12-0 record in his career against the Tiger-Cats (13-0 if you count his 2014 Grey Cup victory).

The opposing quarterback on Friday night will be David Watford, who will be making the first start of his professional career (and his first start since Nov. 14, 2015, with Hampton University).

The Tiger-Cats enter Week 7 on an impressive 12-game win streak at Tim Hortons Field. There’s a very good chance that undefeated run is set to expire this week.

While the number for that game has been bet down throughout the week, you could still get Calgary to win outright at +110 (+1.5 against the spread).

Thursday afternoon brought some unexpected news when the Edmonton Elks announced that starting quarterback Trevor Harris was placed on the six-game injured list.

The Oklahoma State product started four games last year in the XFL for the Tampa Bay Vipers under head coach Marc Trestman, so he does have some pro experience.

Unfortunately for Cornelius, he will face the league’s top defensive unit in his CFL debut.

That is a scary proposition for any quarterback, but especially for a rookie who has never thrown a pass in the three-down game before.

The Winnipeg Blue Bombers have allowed a league-low 12.7 points per game this season, including four of six games where they have held their opponent to fewer than 10 points.

The Bombers boast two of the league’s premier pass-rushers in Willie Jefferson and Jackson Jeffcoat. That dominant duo has combined for nine sacks this season, and they are sure to wreak havoc on the Elks this weekend.

I locked in the Bombers at -4 on Thursday.

As of this morning, Winnipeg is currently -6.5. Getting the Blue Bombers to win by anything less than a touchdown seems like good value.

I also like the Elks under their team total of 19.5 points.

Jevon Cottoy, BC at MTL:  The Lions’ second-year Canadian just posted the top two receiving totals of his young career over the past two games with 93 and 69 yards respectively. All in all, Cottoy has reeled in nine catches for 162 yards and two touchdowns over that span. Currently valued as the 30th most expensive pass-catcher, the former Langley Ram has averaged 18.6 fantasy points over his past two games and is a worthy addition to your squad this week.