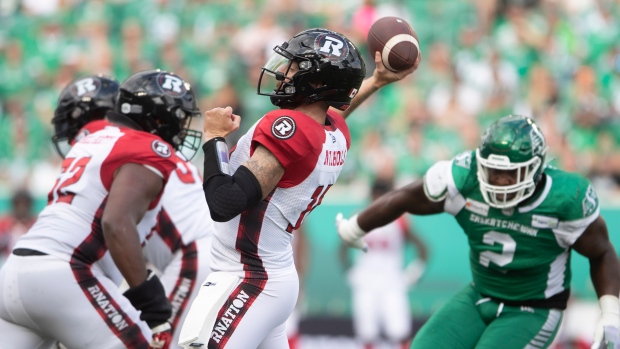 Every week our CFL stats guru Jon Perlberg takes a deep dive Inside The Numbers in order to give bettors an edge.

This week, he takes a closer look at the underlying numbers for an Ottawa Redblacks’ offence that has struggled out of the gate, and explains why Calgary Stampeders’ rookie quarterback Jake Maier will face a tougher challenge than he did in his debut as a starter.

Despite battling to a Week 1 win on the road at Edmonton, the Ottawa Redblacks have had a rocky start to the season on offence.

To put things in perspective, the 94 net yards gained by Ottawa in its season opener were the fewest ever by a winning team in CFL history.

Since 1958, that represents the lowest offensive output by a victorious team in exactly 4,610 CFL games played through Week 3 of 2021.

While it’s no secret that newly minted head coach Paul LaPolice is a genius on the offensive side of the ball, the Redblacks are lacking the personnel to take full advantage of his expertise when it comes to X’s and O’s.

To make matters worse, Ottawa has just two returning starters on the offensive line from 2019 in Mark Korte (moved from left tackle to centre) and Nolan MacMillan (missed Week 3 with a calf injury).

Combine that with the retirements of former starting centre and 2015 first-overall pick Alex Mateas, as well as the franchise’s all-time leader in receptions, Brad Sinopoli, and it’s no surprise that Ottawa has faced an uphill climb to start the season.

In Week 4, the Redblacks will be hard pressed to ignite their offence and top their team total, which is currently set at 20.0 points, against the BC Lions.

After a lacklustre performance against the Elks in Week 3, I’m expecting the Leos’ offence to roar back to life and cover as a 2.5-point favourite on Saturday night in the nation’s capital.

Come on down to Winnipeg

After a disappointing outing in Toronto, the defending champs are poised to get back in the win column against the Calgary Stampeders on Sunday.

The Winnipeg Blue Bombers are 13-1 in their last 14 home games, and I don’t expect anything less than the utmost effort from a defensive unit that was tagged for 30 points and 310 passing yards by Nick Arbuckle in his Argos starting debut.

Even after factoring in their subpar Week 3 performance, the Bombers remain the CFL’s stingiest defence, allowing a league-low 14.3 points per game.

Getting after the quarterback and causing chaos has become a point of pride for defensive ends Willie Jefferson and Jackson Jeffcoat.

With that in mind, the second career start for Stampeders’ quarterback Jake Maier will be decidedly different than his debut.

Winnipeg is the only defence that has held opposing quarterbacks to a completion percentage under 60 per cent this season.

The Blue Bombers have also forced nine turnovers, good for the second-most in the CFL.

I think Winnipeg gets back in the win column in Week 4.

Bryan Burnham, BC at OTT:  In two games against the Redblacks in 2019, BC’s top receiver racked up 47.0 fantasy points on the strength of 18 catches for 230 yards and one touchdown. Following an off week of two catches for 32 yards against the Elks, expect Burnham to heat up once again with this Week 4 matchup.

Kenny Lawler, WPG vs. CGY:  Currently the CFL leader with 27 targets this season, Lawler is also tied for first with 19 catches, two receiving TDs and ranks third in the CFL with 229 receiving yards. Quickly proving to be Zach Collaros’ most trusted pass-catcher, the former California Golden Bear has posted double-digit fantasy points in each of his first three games this season (22.9, 20.7, 11.1 respectively).