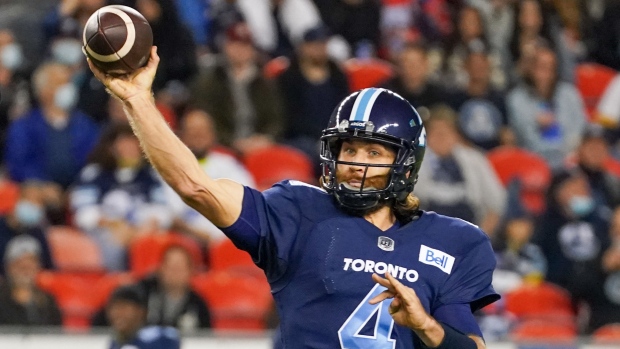 Every week TSN CFL stats guru Jon Perlberg takes a deep dive Inside The Numbers to give bettors an edge. This week, he takes a closer look at whether the Toronto Argonauts can extend their lead over the Montreal Alouettes in the East Division on Friday night, and how some new weapons will impact the Saskatchewan Roughriders’ outlook against the Calgary Stampeders.

The race for first place in the East is heating up as the Toronto Argonauts look to open a two-game lead on the Alouettes tonight in Montreal.

The Boatmen are coming off their final bye week of the season with a record of 6-3, and currently hold the top spot in the division.

Both teams enter Friday’s matchup on three-game winning streaks, but a closer look at the Als’ results so far in 2021 is quite revealing.

Montreal may have a 5-4 record, but this mark has been heavily inflated with four of their wins coming against weaker opposition in the last-place Ottawa Redblacks and Edmonton Elks.

And while the Argos’ offence has struggled at times this season, McLeod Bethel-Thompson has managed to get his squad back on track when it mattered most.

Two weeks ago, at Tim Hortons Field, Bethel-Thompson snatched victory from the jaws of defeat, leading the Double Blue to a 19-point outburst in the fourth quarter and an improbable 24-23 win over Hamilton.

Bethel-Thompson put on a clinic in the final frame, completing 13 of 15 passes for 157 yards and a pair of touchdowns to Chandler Worthy and DaVaris Daniels.

With a full complement of receivers at his disposal and the return of John White to the lineup, Bethel-Thompson and the Argos are set to sail to victory tonight in La Belle Province.

That’s what Cody Fajardo and the Roughriders have sorely missed all season since Shaq Evans suffered a foot injury in Week 2.

Now, with the potential return of Evans to the lineup and the marquee addition of D’haquille ‘Duke’ Williams, the Riders now possess two of the best deep threats in the game.

Williams led the league with 1,579 receiving yards in 2018 with Edmonton and was named a CFL All-Star for his efforts that year.

Particularly noteworthy from his 2018 campaign, Duke made 22 catches on targets of 20 or more yards downfield, which was also good for tops in the league.

This season, Fajardo has connected on only nine of 43 pass attempts of 20-plus yards. And at the time of this writing, his 20.9 per cent completion rate in this regard ranks dead last in the league.

With some key weapons added to his offensive arsenal, Fajardo will take aim at the Stampeders Saturday night at McMahon Stadium.

Despite losing back-to-back games against Calgary by a single possession, the third time will prove to be the charm for the Green Riders in this West Division showdown.