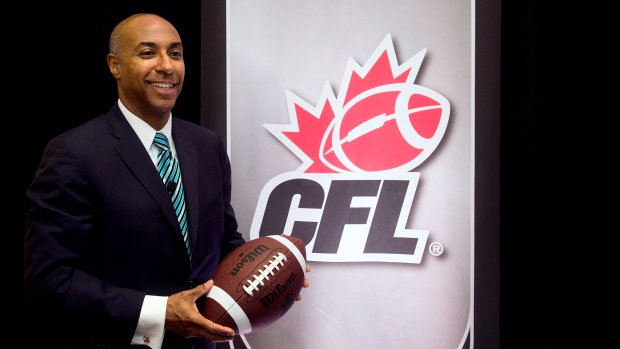 Players and employees of the CFL will undergo yearly mandatory training on violence against women as part of a new league initiative.

The CFL unveiled its policy on violence against women in Vancouver on Thursday, with an emphasis on preventing violence from occurring in the first place and acting quickly when it does happen.

"It's clear that the CFL condemns violence against women in all of its forms — domestic violence, sexual assault, verbal abuse and the disrespectful and damaging attitudes that can form the foundation of violence itself," CFL commissioner Jeffrey Orridge said on a conference call. "We all need to do our part to combat it."

Orridge said the league has the authority to impose sanctions on players or employees who violate the new league policy but he did not elaborate on the exact nature of the punishments, saying they will happen on a case-by-case basis.

The policy was developed in partnership with the Ending Violence Association of Canada, and Orridge said the league consulted extensively with experts in the field of responding to violence against women.

"This policy is acknowledging that violence against women is happening at an epidemic level across our country," said Tracy Porteous, executive director of the Ending Violence Association of B.C. and chair of the Ending Violence Association of Canada. "This policy is saying this violence must stop and that men in businesses have a huge role to play in preventing sexual and domestic violence."

As part of the policy, the league said it will endorse and participate in efforts at the community level to increase awareness of violence against women "throughout society, and in particular among Canadian youth."

"We understand the power of sport and the influence of people involved in sports — whether they be the athletes or even the coaches — that kids look up to," Orridge said.

"Sport has the power to change lives and to change societal norms," he added.