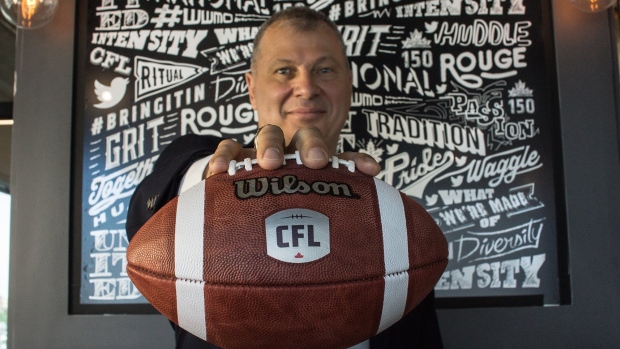 On Sunday, the Grey Cup game between the Calgary Stampeders and Ottawa Redblacks will be broadcast in Mexico in Spanish for the first time ever.

"We're really going to use this to kick off what we hope is a long-term, fantastic relationship that helps us grow the game of football," Ambrosie said. "I think it's the beginning of a new beginning for us."

There had been talk of a CFL regular-season game being played in Mexico City as early as next year. But a league official said due to logistics, a more likely scenario is for that to happen in 2020.

The LFA is an eight-team Mexican semi-pro American spring football circuit. The letter of intent is not a binding contract between the two leagues but it does pave the way for a CFL scouting combine in Mexico this winter, increase co-operation and sharing of resources.

The signing comes at curious time for the CFL.

Teams in Toronto and Montreal both have attendance issues and there's uncertainty in Vancouver whether if owner David Braley will sell the B.C. Lions.

And there's also the matter of the league's impending talks with the CFL Players' Association this off-season with the current collective bargaining agreement slated to expire in May 2019.

But Ambrosie remains bullish on the CFL's ability handle all situations.

"I feel the future for football in Canada is bright but I also recognize there are challenges that have to be addressed," he said. "I think we can do both and we should do both.

"We should have our eyes on the horizon, we should be looking forward and looking out into the future and planning for the bigger, stronger CFL that we've been talking about for the past 16 months."

Next season, the Alouettes will reduce seating at Molson Stadium from just over 23,000 to 20,000 but Ambrosie said that's a standard business practice.

"The issue of contracting the size of the stadium is just a tactical decision," he said. "It's like an inventory management issue that businesses will do to reduce the amount of supply they have available to make the supply they have more valuable to.

"But there's no doubt there are challenges there. Somehow we've lost that connection with Alouettes football and we have to find a way to get it back."

Ambrosie called the upcoming CBA talks, "the great unknown." But he remains very confident the two sides can reach a deal and eliminate the threat of a work stoppage.

"I've said it before and I'll say it again that I think the future is better together," Ambrosie said. "I'm optimistic.

"I think we can sit down with the players shortly after the season and lay out a path to put in place a deal that's fair for both sides."

Ambrosie said ongoing dialogue must also take place regarding developing Canadian quarterbacks, the league's ratio, long-term care for players and adopting a one-division format. But Ambrosie feels the letter of intent with the LFA could provide opportunities for Canadian-born quarterbacks to further hone their skills in Mexico then head to the CFL.

Ambrosie also said there's a "move is afoot," for the CFL to hold Grey Cup a week earlier by 2020.

"In our requests for 2020 Grey Cup bids we've asked the teams to bid one week earlier," Ambrosie said. "It's a step in the right direction."

Earlier this month the NHL and a group of retired players reached a settlement in a lawsuit brought against the league over head injuries. In 2017, the NFL and a group of former players agreed to a US$1 billion settlement.

The CFL is currently facing a $200-million class-action suit filed by a group of retired players but Ambrosie said the two sides are talking.

"In the case of the NFL and NHL that process took time to reach the outcome that they've achieved," Ambrosie said. "We'd like similarly to reach a successful conclusion with the plaintiffs on this matter.

"This has got to be an item that gets talked about as soon as we hit the ground Monday morning."

Ambrosie said the decisions last year to eliminate padded practises and extend the regular season to 21 weeks have had the desired affect. He added in-practice injuries and game-days lost to injury have declined 35 and 10 per cent, respectively.