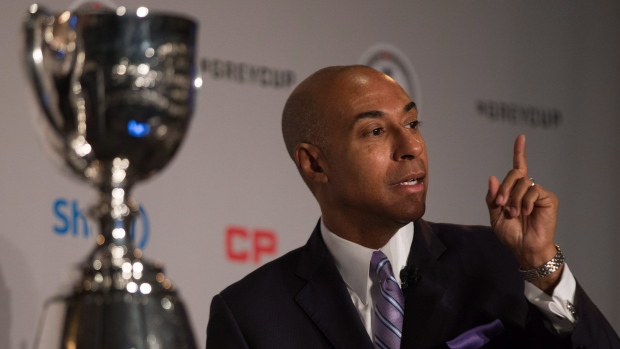 WINNIPEG - CFL commissioner Jeffrey Orridge says the league and its players are continuing to work on a new drug-testing policy.

Orridge said during his state-of-the-league address Friday there's a proposal on the table and that he wants a deal as quickly as possible. He added the two sides are meeting here during Grey Cup week.

"I want to get it done as soon as possible and I take responsibility for ultimately getting it done," Orridge said. "I'm sure they've been discussing it.

"It's unfortunate we don't have a drug policy in place right now but we're working towards making it better."

In May, the CFL cut ties with the Canadian Centre for Ethics in Sport in a dispute over the league's drug policy. The move came after the head of the only laboratory in Canada sanctioned by the World Anti-Doping Agency condemned the CFL.

Christiane Ayotte said her lab wouldn't test CFL samples because of its refusal to suspend first-time offenders or uphold drug bans handed down in the university ranks. That forced the CFL to look for another testing partner.

Orridge, who took over as commissioner in late April, had said earlier this season the league was "weeks" away from finding a new testing lab. But on Friday, he added he made the comment without first realizing all that was involved in the process.

"But we've been working hand in hand with the Players' Association on developing something that will be much more forward-thinking, much more positive and much more beneficial. As you know, it's part of the collective bargaining agreement and so we've got to do it in partnership with (players) and we want to make sure we do get it right."

Orridge also said any deal hammered out by the CFL and CFLPA must then go to the players for ratification.

"They (players) are very concerned about making sure it's equitable, it's fair, it's reasonable and it's right," Orridge said. "And not just right for today but it's right for years to come because we don't want to have to re-visit this kind of situation year in and year out.

"We want to make sure we get it right."