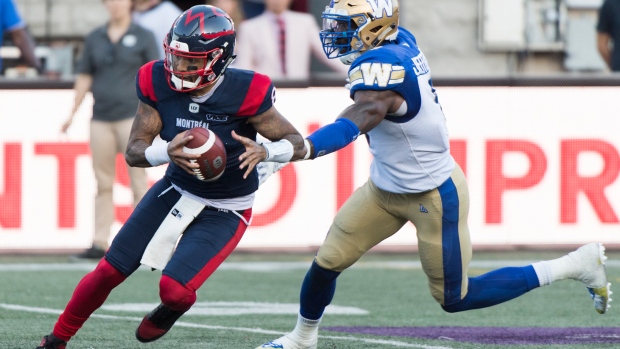 Montreal Alouettes quarterback Vernon Adams Jr. has been suspended one game for a dangerous and reckless act stemming from a helmet-swinging incident Saturday against the Winnipeg Blue Bombers.

Adams and Blue Bombers linebacker Adam Bighill were engaged on an interception return during Montreal's come-from-behind 38-37 win. As Adams was going down, he had a grip of Bighill's facemask with both hands.

Bighill's helmet came off as the Alouettes quarterback went to the turf. Then while lying on his back, Adams swung Bighill's helmet with his left hand at the Bombers' linebacker.

Bighill, who didn't retaliate, tweeted afterward the helmet hit him in the face.

Rips my helmet off.... then hits me in the face with it... and the ref is right there looking at it... https://t.co/FXqUKiqXeD

Adams was flagged for unnecessary roughness, but wasn't ejected.

Montreal rallied from a 24-point deficit to secure the win, the largest comeback in club history. Adams played a big role, completing 27-of-43 passes for 488 yards and four TDs while rushing six times for 38 yards.