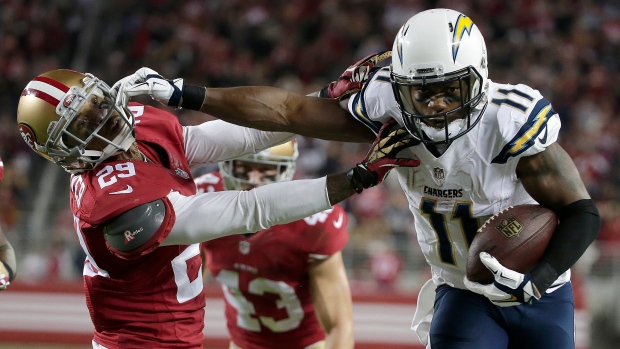 SANTA CLARA, Calif. - Philip Rivers looked at the 21-point deficit on the scoreboard at halftime and even he wondered whether the San Diego Chargers had it in them to come back. The season depended on it, so Rivers took charge.

He prevailed through a balky back and a sore chest to keep San Diego's slim playoff chances alive, rallying his team to tie it in the final minute and setting up Nick Novak's 40-yard field goal nearly 5 minutes into overtime in a 38-35 victory over the San Francisco 49ers on Saturday night.

"Obviously, an unbelievable finish," coach Mike McCoy said. "We had about as bad a first half as we could possibly play. ...You saw a lot of emotion on the sideline throughout that second half — the excitement, the energy, the way we play football."

Rivers found playmakers in Antonio Gates and Eddie Royal when two of San Diego's offensive stars were down with injuries.

He completed his fourth touchdown pass of the day with a tying 11-yard TD pass to Malcom Floyd with 29 seconds left in regulation after completing a pair of fourth-and-longs as the Chargers (9-6) forced overtime.

"What a comeback. It's one of the greatest I've been a part of, and it keeps us alive," Novak said. "To kick the game-winner, do-or-die kick ... loved being in that moment."

On a night nearly everything clicked for the home team until the waning moments, Rivers made plays without wide receiver Keenan Allen and running back Ryan Mathews.

He shined with the season on the line. The Chargers came in needing to win out and get some help after beginning the week tied with Kansas City and Buffalo, one game out of the final wild-card berth. San Diego ends the season at Kansas City next Sunday.

Rivers converted fourth-and-8 and fourth-and-10 on the key final San Diego drive of the fourth quarter.

"We just got going and fell into a rhythm," Rivers said. "At halftime, we didn't know if we could come all the way back, but we were going to fight. That's who we are."

The 49ers blew just their second game when leading by 21 or more at halftime and lost their fourth straight game under embattled coach Jim Harbaugh. They lost 42-41 to Minnesota on Oct. 24, 1965, after leading 35-14 at halftime.

Colin Kaepernick ran 90 yards for a touchdown and Frank Gore had a 52-yard touchdown run as the Niners (7-8) grabbed early momentum.

"Right now there's not much to say," Harbaugh said. "That's a tough one."

Rivers threw touchdown passes of 21 and 1 yard to Antonio Gates and another to Eddie Royal, but also was hurt by three interceptions. On one of those, Antoine Bethea had a 49-yard return for his first career touchdown. A defence minus recently released starting lineman Ray McDonald never let Rivers find a rhythm.

The 31-year-old Gore finished with 158 yards and he needs 38 yards in the final game next weekend against Arizona for a fourth consecutive 1,000-yard season and eighth in his 10 NFL seasons. His scoring run was his longest since a 64-yarder on Nov. 1, 2009, at Indianapolis. It also was the longest TD run allowed by San Diego since 2010 before Kaepernick topped it.

Gore had more yards in this game than in his previous four games combined, and New York Yankees star Alex Rodriguez was in attendance wearing the running back's red No. 21 jersey.

Rookie Bruce Ellington caught an 8-yard touchdown pass from Kaepernick early in the second quarter that put the Niners up 21-0, then ran for a 1-yard score late in the half before leaving with a hamstring injury.

Rivers, 33 for 54 for 356 yards, sat out Wednesday's practice with chest and back injuries.

"We've got the best quarterback in the league," Floyd said. "We had faith in us."

Harbaugh, who is facing a constant swirl of speculation about his future — like a report alma mater Michigan has made him a six-year offer to coach the Wolverines — has said there's still plenty to play for, like a winning season despite the disappointment following three straight trips to the NFC championship game.