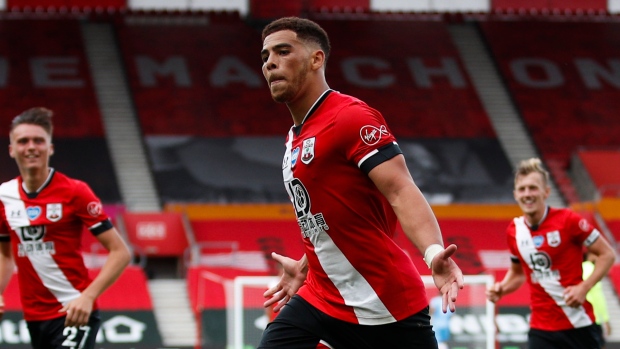 SOUTHAMPTON, England — Che Adams scored twice to inspire Southampton to come from behind for a 3-1 win against his former club Sheffield United on the final day of the Premier League on Sunday.

Play got off to a scrappy start at St Mary’s, where the pre-game focus was on Southampton forward Pierre-Emile Hojbjerg’s omission amid interest in a player who wants to leave.

John Lundstram put the visitors ahead in the 26th minute when a cross from the left found its way through for the Sheffield midfielder to score with a low finish.

Alex McCarthy made a brilliant save to deny Lundstram from scoring his second.

Ralph Hasenhüttl’s Southampton returned strongly after the break and equalized through Adams after some patient buildup play in the 50th. He claimed his second in the 71st before Danny Ings wrapped up the win with a penalty in the 84th.

Ings ended with 22 league goals for the season, one behind Golden Boot winner Jamie Vardy for Leicester.