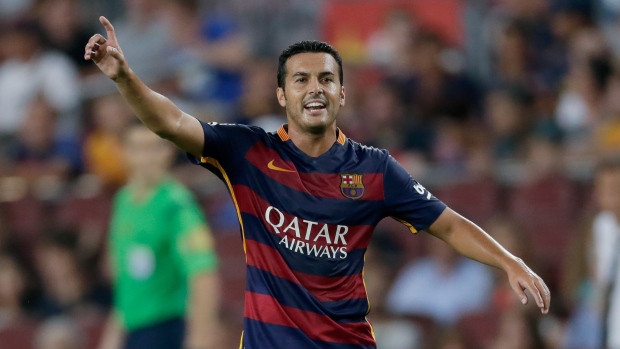 Pedro is heading to England, but it's going to be London and not Manchester for the Spanish international.

After weeks of speculation linking the 28-year-old to Manchester United, Jose Mourinho's side swooped in with a fee of £21 million to Barcelona for the player.

Pedro is expected in London later Wednesday to complete his medical.

A product of the Barca academy, Pedro has scored 99 times in 326 appearances since his senior team debut in 2009. In his time at Camp Nou, Pedro has captured five La Liga titles, three Copa del Reys and three Champions League titles. He is also a World Cup and Euro winner with Spain.

The Pedro deal will mark Chelsea's second signing this week. The team signed Ghana international left back Baba Rahman from Bundesliga side Augsburg on Sunday.

The current Barclays Premier League holders, Chelsea have gotten off to a rocky start in their first two matches with an opening day draw with Swansea City that saw 'keeper Thibault Courtois get sent off and a 3-0 defeat at the hands of Manchester City on Sunday.

The Blues return to action on Sunday when they visit the Hawthorns to take on West Bromwich Albion.