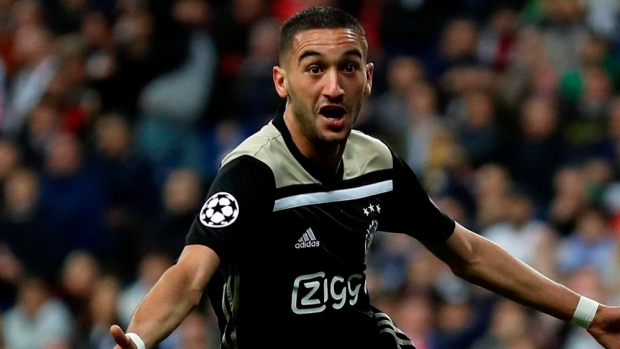 LONDON — Chelsea agreed Thursday to sign winger Hakim Ziyech from Ajax at the end of the season on Thursday for 40 million euros ($43 million).

Ajax said the Morocco winger will join Chelsea on July 1 after finishing the season. Chelsea said personal terms with Ziyech have yet to be agreed.

Ziyech was a key player for Ajax in its run to the Champions League semifinals last season, often cutting inside from the right flank. He scored the opening goal in Ajax's 4-1 second-leg win over Real Madrid and also scored against Tottenham in the semifinals.

Ziyech was on the Ajax team which lost the 2017 Europa League final to Manchester United. He also helped Ajax win the league last year and was Dutch player of the season in 2018.

He has scored 49 goals in 160 competitive games for Ajax since arriving from Twente in 2016.

Ajax could receive another 4 million euros ($4.3 million) for Ziyech "with variable factors," the Dutch club said.

Ziyech represented the Netherlands as a youth international before switching allegiance to Morocco in 2015. He went on to play in all three of Morocco's games at the 2018 World Cup.