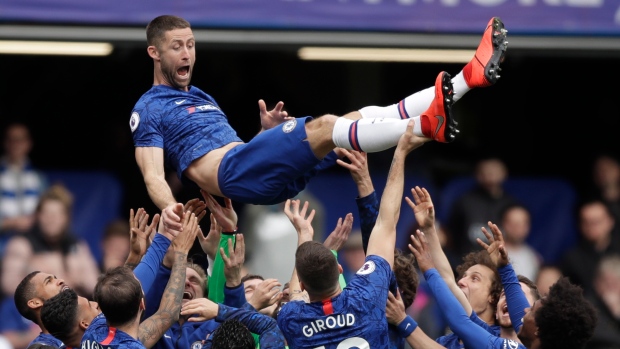 LONDON — Chelsea secured a top-four spot in the Premier League with a 3-0 win over Watford on Sunday after two goals in a three-minute span helped the club to clinch a return to the Champions League.

The win, coupled with Arsenal and Manchester United both being held to 1-1 draws, means Chelsea is guaranteed to finish in the top four after next weekend's final round of games.

The result takes some pressure off manager Maurizio Sarri, who could still finish his first season in charge with a trophy as Chelsea hosts Eintracht Frankfurt in the second leg of the Europa League semifinals on Thursday. The first leg ended 1-1.

Sarri's team had been booed off at halftime with the score still 0-0 at Stamford Bridge but Ruben Loftus-Cheek provided the breakthrough with a header in the 48th minute and David Luiz netted the second just three minutes later from another corner.

Gonzalo Higuain added the third with an elegant chip past goalkeeper Ben Foster from a difficult angle as Chelsea took full advantage of Tottenham's loss on Saturday to move above Spurs into third place.

Eden Hazard was back in the starting lineup after being on the bench against Eintracht Frankfurt in the Europa League semifinals on Thursday and set up the first two goals with deliveries into the box.

The only negative for Chelsea was N'Golo Kante having to come off injured after just 10 minutes, with Loftus-Cheek coming on as his replacement.