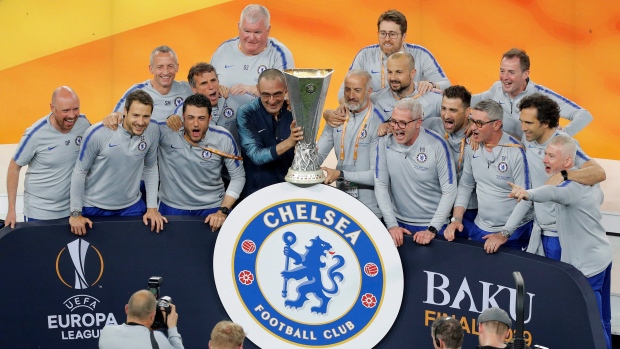 If there's any English club that thrives in chaos and adversity, it's Chelsea.

And there's plenty of that at Stamford Bridge this off-season.

Days after selling Eden Hazard — the club's best player and one of the greatest to pull on the blue shirt — Chelsea allowed manager Maurizio Sarri to leave after only one season in charge to return to his native Italy and take over at Juventus.

Chelsea, remember, is currently under a transfer embargo. There have been doubts about the long-term commitment of Russian billionaire owner Roman Abramovich, too.

So, should fans be worried about the current situation?

After all, this is the team which has had 14 managers — either permanent or interim for an extended period, and takes in two separate spells under Jose Mourinho — since Abramovich began his ruthless and trigger-happy reign as owner in 2003.

It feels slightly different this time around as many of the senior locker-room leaders down the years, like John Terry, Didier Drogba, Frank Lampard, Petr Cech and, most recently, Gary Cahill, are no longer in the squad.

Lampard and Cech may yet be back in different guises, charged with the task of continuing Chelsea's trophy-winning habits in a period where Manchester City and Liverpool are clearly the dominant forces in England.

Here's a look at the challenges facing Chelsea:

It had been on the cards for a few weeks, but confirmation finally arrived on Sunday: Maurizio Sarri was heading back to Italy after one turbulent year at Chelsea.

For the third time in the past four offseasons, the club needs to hire a new manager. It means more upheaval for the players, who will have to adapt to yet another approach and style of play.

What's next after Antonio Conte's reliance on a three-man defence and wingbacks, and then the so-called "Sarriball" philosophy?

The favourite to be Chelsea's next manager is Frank Lampard, a club great who is its all-time top scorer with 211 goals. It would be a bold move since Lampard has only one year behind him in senior management, at Derby last season when his team lost out in the second-tier League Championship playoff final .

He won't be prized away easily, however.

"We have made it clear to everyone, but most importantly to Frank, that we want him and to retain his services for the long term," Derby owner Mel Morris said Monday. "If Chelsea want to hire Frank, then it is in their gift to make an offer in pursuit of that."

If Lampard is hired, he would be walking into a difficult situation.

Chelsea is currently banned by FIFA from registering any new players for the next two windows for breaking youth transfer rules, although the club has filed an appeal with the Court of Arbitration for Sport.

The transfer ban does not prevent Chelsea from selling players, with Hazard having already joined Real Madrid for a reported 100 million euros ($113 million) plus variables.

To plug gaps in the squad, it might mean that Chelsea dips into its academy — finally, many would say — or relies more on players who are usually sent out on loan. At one stage last season, 42 players were out on loan to other teams, two of them with Lampard at Derby (midfielder Mason Mount and defender Fikayo Tomori).

There's no shortage of young talent, either, at Chelsea, which won the FA Youth Cup for five straight seasons from 2014-18 and has been UEFA Youth League runner-up the past two seasons.

If Lampard was to come in, he would likely bring with him his assistant at Derby, Jody Morris, who used to be a youth-team coach at Chelsea.

There are some obvious issues in the playing squad, not least now that Hazard has left.

In light of the impending FIFA ban, Christian Pulisic was signed from Borussia Dortmund for 64 million euros ($73 million) in January and will slot into Hazard's place in the squad. The 20-year-old from Hershey, Pennsylvania, has a tough act replacing one of the world's best players, not only because of his age and the fact that he will be in a new country and under lots of scrutiny.

Hazard was the team's most reliable attacker in recent seasons, so who will get Chelsea out of trouble now in tight matches? Pedro Rodriguez and Willian are inconsistent. Another winger in 18-year-old Callum Hudson-Odoi is still raw and is set to miss the start of the new season anyway while he recovers from a ruptured Achilles tendon.

Up front, Gonzalo Higuain was disappointing in his loan spell at Chelsea from Juventus in the second half of last season and might not take up the option of extending his stay at Stamford Bridge by a further 12 months. Sarri will likely want to keep Higuain at Juventus now that he is manager there. That leaves Olivier Giroud as Chelsea's first-choice striker but he might struggle to be as effective without Hazard running off him and reading his lay-offs.

Midfield could also be a problem. Where does Jorginho stand now that Sarri, whom he followed to Chelsea from Napoli last off-season, has gone? Will the new manager want N'Golo Kante to return to his best position as a deeper-lying midfielder rather than the roaming player Sarri wanted him to be?

Roman Abramovich, who has transformed Chelsea since his 2003 takeover, has been unable to travel to Britain to watch Chelsea's domestic games since his visa expired at the end of April last year. Development of Stamford Bridge, which would have been a major project costing a reported 1 billion pounds ($1.25 billion), has been put on hold as a result.

Making Alvaro Morata (2017) and then Kepa Arrizabalaga (2018) the club's record signings in consecutive years counters suggestions that Abramovich is holding back his funds, yet being a distant owner does raise questions about his future commitment.

Marina Granovskaia, a club director and confidante of Abramovich, has overseen Chelsea's transfer policy and player negotiations in recent years, especially since the departure of technical director Michael Emenalo in late 2017.

The leadership group may yet to be bolstered by the return to the club of Petr Cech, who recently retired from playing and has been linked with a behind-the-scenes role at Chelsea — perhaps as sporting director.

Steve Douglas is at www.twitter/com/sdouglas80