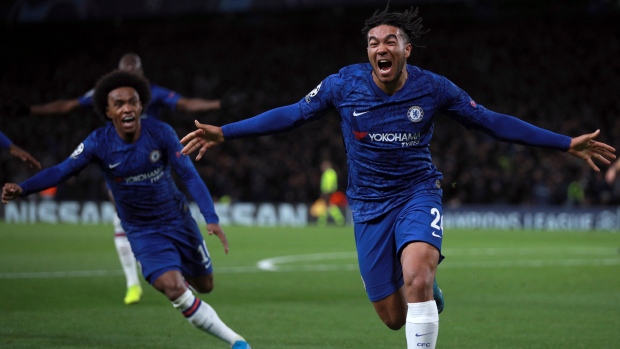 LONDON — Substitute Reece James completed an improbable comeback for Chelsea against Ajax in the Champions League on Tuesday as the hosts came from three goals down to draw 4-4 after the Dutch team was reduced to nine men.

In a roller-coaster match at Stamford Bridge, Frank Lampard's side scored two own goals and two penalties while Ajax had two players sent off.

Ajax, a semifinalist last season, was 4-1 up at Stamford Bridge after 55 minutes and appeared headed for an easy victory. But Chelsea pulled a goal back in the 63rd before Daley Blind and Joel Veltman were both sent off in a sequence that completely changed the game.

Chelsea, which won 1-0 in Amsterdam last month, was also awarded a penalty for handball by Veltman — which led to his second booking — and Jorginho made it 4-3 with his second spot kick of the game.

James equalized with a low show from a rebound in the 74th to complete the comeback, and Chelsea even thought it had scored a late winner through Cesar Azpilicueta.

However, the goal was ruled out for a handball on Tammy Abraham after a video review.

"It was great to pull it back and a shame that we didn't win," said the 19-year-old James. "It's always a great feeling scoring here at Stamford Bridge and for such a great club."

"I didn't (expect it)," he said. "I was happy to come on and make an impact, scoring a goal is a bonus. We had a few more chances where we could have scored but it was a great end to the game."

Abraham's own-goal had given Ajax the lead before Jorginho equalized with his first penalty. Quincy Promes put Ajax in front with a header, while another own-goal by Kepa Arrizabalaga and Donny van de Beek's strike gave Ajax a three-goal lead.

Ajax's third goal came with a slice of luck as Hakim Ziyech's swirling free kick from the right flew over Kepa and hit the inside of the post, before smacking the goalkeeper in the face and bouncing into the net.

But the key sequence came when Blind fouled Abraham. The referee initially played the advantage as Callum Hudson-Odoi pushed forward and fired a shot that struck Veltman's hand — resulting in both Ajax players earning a second yellow card and Chelsea getting the penalty.

The result left both teams and Valencia all tied on seven points in a very tight Group H. Valencia beat Lille 4-1 in the group's other match.