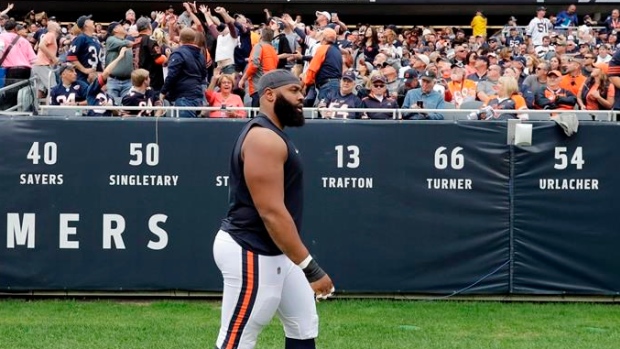 LAKE FOREST, Ill. — The Chicago Bears defence held it together through seven games without team leader Akiem Hicks because of a dislocated elbow.

Now their Pro Bowl defensive end is back practicing but his possible return to the lineup could come too late to help the Bears.

The Bears (6-6) host the Dallas Cowboys (6-6) and face the NFL's top passing attack Thursday night, possibly with their season on the line, but Hicks can't return from injured reserve to game action until the following week against Green Bay.

Right now, Hicks is just relieved simply to be back at work.

"I would say this, if I can get my body to a place where I feel like I can compete at a high level, there's nothing that would stop me from being on the field with my boys," Hicks said.

Hicks suffered a left elbow injury early in the first quarter of the game in London against Oakland Oct. 6 and went on injured reserve a week later. He found it difficult watching games, particularly when the Bears lost four straight earlier this year.

"Everybody got more reps on the defensive line: Bilal Nichols, Roy Robertson-Harris, Nick Williams who has seven sacks right now. You know what I’m saying? So for guys to step in and have that type of production, it’s great."

The production was solid but the Bears defence is a few steps below what it was last year when it led the league in points allowed and causing turnovers, while finishing third in yards allowed. The Bears are fourth in points allowed (17.3 per game) and seventh in total yards. They're eighth stopping the run and when Hicks played last year they were No. 1.

Hicks often absorbs double teams on the line of scrimmage, which makes it tougher to double-team pass rusher Khalil Mack.

Still, the defence has held its own against the Lions, Giants and Rams the past four weeks in going 3-1, but the only way the Bears can make a charge to the playoffs is by beating Dallas without Hicks.

"We just want to continue to build," safety Eddie Jackson said. "We know these last four games are very important for our season."

Coming off their win on Thanksgiving, the Bears will be playing their fourth game in 19 days against Dallas, then finish with the Packers, Kansas City and the Minnesota Vikings. Prescott, Aaron Rodgers, Patrick Mahomes and Kirk Cousins at quarterback present a decided step up in competition for the defence.

"Guys are not really worried about the schedule or how many games we've played in certain amount of days," Jackson said. "We just all want to get to the task and do what we've got to do and come in and correct the mistakes and just continue to play our ball like we've been playing these last two games."

The goal for the Bears defence is to make Hicks' return against the Packers relevant by beating Dallas, and then take their chances in the final three games.

"He can wreck a game at any moment," linebacker Roquan Smith said of Hicks. "Just having a guy like that means a lot."