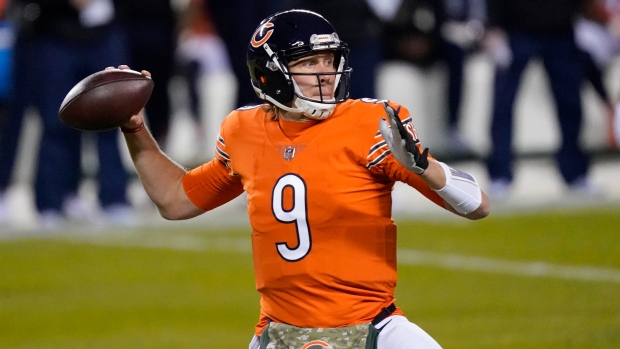 Chicago Bears quarterbacks Mitchell Trubisky and Nick Foles are both still dealing with injuries and head coach Matt Nagy did not name a starter for Sunday's game against the Green Bay Packers, saying a change at the position is still on the table.

Chicago QBs Mitch Trubisky (shoulder) and Nick Foles (hip) are still dealing with injuries, and Bears’ HC Matt Nagy declined to name a starter for Sunday’s game in Green Bay, saying a QB change is still "on the table."

Trubisky is dealing with a shoulder injury while Foles works through a hip injury.

Foles, who replaced Trubisky as starter earlier this season, was carted off the field during the Bears' Week 11 loss to Washington.

In seven starts for the Bears this season, Foles is 2-5. He's thrown for 1,852 yards, 10 touchdowns, and eight interceptions.

In the Bears' other three starts, Trubisky was 3-0, throwing for 560 yards, six touchdowns, and three interceptions.