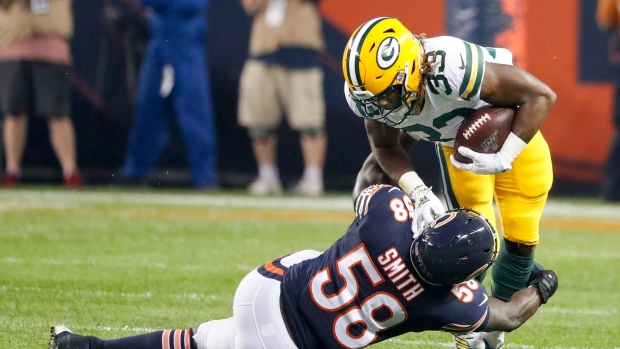 LAKE FOREST, Ill. — The Chicago Bears played almost all of their 31-24 win Thursday over the Dallas Cowboys without injured linebacker Roquan Smith, and now they'll have to finish the season without him.

Bears coach Matt Nagy said on Monday that Smith suffered a torn pectoral muscle in the win and will go on season-ending injured reserve.

Smith was the eighth pick of the 2018 draft and has been a starter since early last year. He experienced a shaky start to the season, missing the Week 4 win over Minnesota because of what the team called a "personal issue."

However, he bounced back and played his strongest game of the season against Detroit a week before suffering the pectoral muscle injury on the first drive against Dallas.

"Overall I really thought you felt him, especially here in the last several games, really turning it on, really playing fast," Nagy said. "He's always had that every play that he gets, every game that he plays.

"For the rest of his career he's only going to get better and better in my opinion."

Nagy thought learning the defence last year and then the changes put in by new defensive co-ordinator Chuck Pagano were the only things to slow down Smith before his injury.

Starter Danny Trevathan has been out since suffering an elbow injury Nov. 10 and there has been no indication his return is imminent, although he is not on injured reserve.

Pierre-Louis was a backup for the Jets last year and played for the Chiefs when Nagy was an assistant coach in Kansas City. He made five tackles, including one for loss, and had a quarterback hit and two pass breakups in the win over Dallas.

"We have the right pieces so I just have to make sure I do my job and the rest of the team is going to have my back," Pierre-Louis said.

Pierre Louis did play 23 snaps on defence against Minnesota earlier this season when Smith was absent.

"I'm just going to trust the coaching," Pierre-Louis said. "I didn't go into Thursday's game knowing that certain things were going to happen. I just relied on the coaches. They just put us in position to execute the win."

The Bears likely will get back defensive end Akiem Hicks from an eight-week stay on injured reserve this week. He suffered an elbow dislocation but has practiced for a week and is eligible to return to play against the Packers.

For Hicks, the first contact he has in the game after missing so much time will be a key to how well his comeback will go.

"Everything is going to come to light in those first couple plays," Hicks said. "There's nothing like that first moment being back or stepping on the field for that first contact.

"You can simulate whatever environment you want, but there's nothing like it."