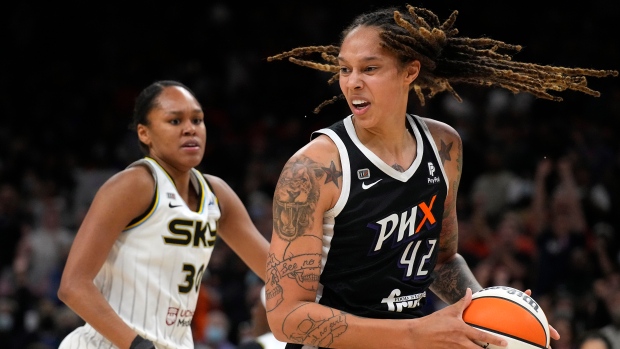 After the Phoenix Mercury tied the series with a 91-86 overtime victory on Wednesday, the WNBA Finals now shift to Chicago for Game 3 where the Sky look to take a critical 2-1 series lead at home.

Watch the game LIVE at 9 pm ET/6 pm PT on TSN2 and streaming on TSN.ca, the TSN App and TSN Direct.

The Mercury’s ‘Big Three’ carried them during Game 2. Brittney Griner led the way from start to finish, finishing with 29 points and nine rebounds.

Playing the best basketball of her career, Griner earned a spot on the All-WNBA First Team for her efforts this season.

Joining Griner on the All-WNBA First Team is Mercury teammate Skylar Diggins-Smith, who came through with a big game on Wednesday, netting 13 points, 12 assists and seven rebounds.

It was in overtime where Diana Taurasi came to shine, dropping eight of her 20 points on the night in extra time.

The Mercury got a boost from Sophie Cunningham’s return to the lineup, going three-for-four from three.

For the Sky, the usual group continued to pace Chicago in Game 2.

Courtney Vandersloot had a big game, dropping 20 points with 14 assists. She earned a spot on the All-WNBA Second Team after a season where she led the league in assists for the fifth consecutive year and sixth season overall.

Allie Quigley had 19 points and six rebounds while Kahleah Copper had 15 points and nine rebounds on the night.

Chicago had many moments in Game 2 where they led the way but their inability to finish at the end kept them from the win.

In comparison, the Mercury had a slow start but clutch plays down the stretch were the difference-maker.