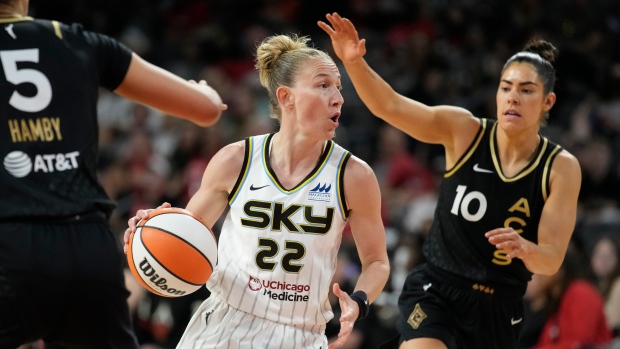 LAS VEGAS -- — Courtney Vandersloot scored 25 points and the Chicago Sky completed the biggest comeback in WNBA history, rallying from 28-down to beat the Las Vegas Aces 104-95 on Tuesday night.

The previous record was a 25-point rally most recently done in 2013 by the Sky.

Las Vegas shot 63% from the field in the first quarter, and scored 41 points to set a franchise record for points in a quarter. But Chicago outscored Las Vegas 59-25, after falling behind by 28 points, to enter the fourth quarter with a lead.

The win means the two teams split their head-to-head meetings so homecourt for the WNBA Commissioner's Cup championship game will come down to the second tiebreaker. That's point differential in the cup games and the Aces have a huge lead over the Sky with two games left to play.

Young sank a 3-pointer to cap Las Vegas' 23-0 run for a 25-4 lead and Aisha Sheppard beat the first-quarter buzzer with another 3-pointer. Las Vegas led 62-51 at the break behind Dearica Hamby's had 15 points. Chelsea Gray was the only Las Vegas starter not in double figures by halftime, but she had six assists.