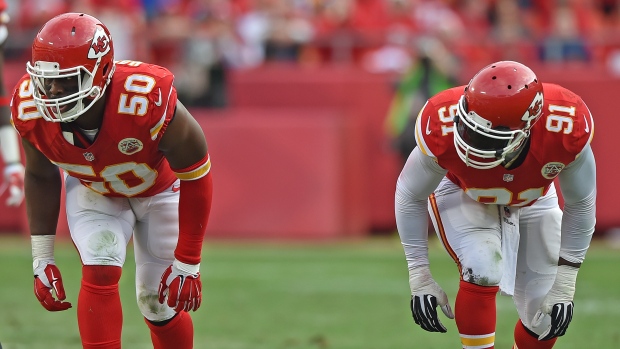 KANSAS CITY, Mo. - Few people have a better vantage point to watch Justin Houston and Tamba Hali than Eric Berry, the Pro Bowl safety who stands behind them on every play in Kansas City's highly ranked defence.

So when Houston went down more than a month ago with a hyperextended knee, and Hali followed him out of action with a broken thumb, the loss was as noticeable to Berry as anyone.

Not just in their physical presence, either.

"It changes a lot just from a mental aspect, having that experience on the field, knowing what to look for, being in a lot of games," Berry said. "Pre-snap reads and stuff you don't see from a physical standpoint, but mentally having the team's awareness up — that's big."

Their return couldn't come at a better time.

Houston expects to play for the first time since Nov. 29 when the Chiefs visit the Houston Texans on Saturday for their AFC wild-card game. Hali also expects to be on the field for his usual duty after testing out his surgically repaired thumb by playing just 14 snaps a week ago against Oakland.

Together, the duo has combined for 14 sacks despite seven-plus games.

"Injuries always hurt you. We put certain people in place to do their job," fellow linebacker Derrick Johnson said. "Two get those two back, that's going to make our defence even tougher."

Not that it wasn't tough without them.

After a rocky start to the season, the group has matured into one of the league's best. They allow just 17.9 points per game, trailing only two other teams, and have dropped that number to 12.9 during a franchise-best 10-game win streak that allowed them to secure the No. 5 seed in the playoffs.

They piled up six sacks against the Raiders, even without Houston or Hali getting one.

Which is precisely why Houston never got frustrated that his recovery wasn't moving along more quickly. Sure, he acknowledged it would have been nice to "knock some rust off" by getting onto the field last week — he was listed as questionable — but there was no real reason to risk it.

"It would be different if we were losing," he said. "As long as we were winning, I was happy."

Houston will wear a brace on his knee against the Texans, and is practicing with it this week so that he can get used to it. In some ways, it's similar to the situation he was in two years ago, when he wore a brace on his dislocated elbow for a playoff game in Indianapolis.

"I know what to expect now compared to a few years ago," he said. "We'll see on Saturday."

"You just have to see where he's at in his conditioning, reaction time," Sutton said. "Deep down inside, the guy has played a lot of football. He knows what he's doing. I think it'll be fine."

Hali at least got a sense of what he'll be dealing with last weekend. His right thumb was heavily wrapped into a club against the Raiders to protect the three screws that put it back together, and Hali figures to have the same sort of protection against the Texans.

"Our thought in the whole deal was get him the opportunity to play, get used to where he was at with his thumb," Sutton said. "I think it was really valuable to get out there and go, know where he's at, how he's going to handle this."

Now, the big question is this: How are the Texans going to handle this?

Houston had a sack and forced a fumble when the teams met to open the regular season, and now the Texans will be without Pro Bowl left tackle Duane Brown, who injured his quad last weekend.

"They've got a really good team and our guys know it's going to be a challenge," Texans coach Bill O'Brien said. "That's what the playoffs are all about."

Notes: CB Marcus Peters was voted defensive Rookie of the Month. ... S Husain Abdullah was back at practice Thursday after dealing with a personal issue. ... The Chiefs depart for Houston on Friday.