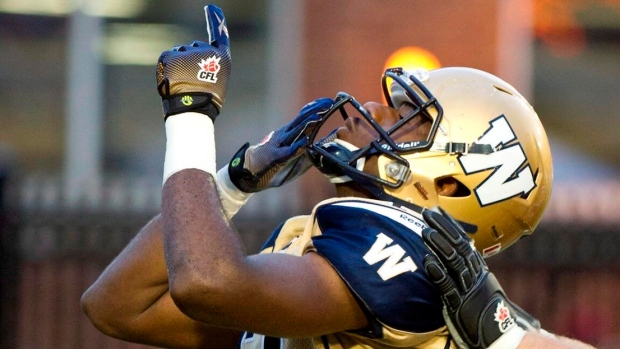 In their third straight trip to the playoffs last year, the Winnipeg Blue Bombers took the next step, advancing to the West Final. The team has made steady progress in the Andrew Harris-Matt Nichols era, but the next next step is the hardest, earning a trip to the Grey Cup. Entering the 2019 season, the Blue Bombers are on the cusp.

Looking for a final push over the top, the Blue Bombers added some big names in free agency, including defensive end Willie Jefferson and defensive back Winston Rose, both projected starters. But arguably the biggest add came months after the February free agency spending spree in receiver Chris Matthews.

After four-plus seasons, and one outstanding Super Bowl performance in the NFL, Matthews returned north of the border with the Calgary Stampeders. But his stay with the Stamps was always going to be a short one; Matthews was brought in as reinforcement for the Stamps’ Grey Cup run, and he earned a ring for his service. Now he’s back where it all began for him in the CFL, and looking to set up roots.

Matthews, 29, was named CFL Most Outstanding Rookie in his first stint with the Blue Bombers, and finished with 19 receptions for 350 yards and a touchdown in six games with the Stamps last year, proving the production is still there.

“There aren’t many guys his size (6-foot-5, 228 pounds) with his talent,” quarterback Matt Nichols said. “I think that he just brings an extra dynamic to us. He’s going to take some pressure off our other guys.”

It wasn’t all incomings in terms of player movement for the Bombers, however. The team’s offensive line was particularly hit hard, with CFL All-Star centre Matthias Goossen retiring and West Division All-Star Sukh Chungh signing with the BC Lions. Winnipeg’s replacements look good on paper, however, with first-rounders Drew Desjarlais (2019) and Geoff Gray (2017) expected to slot in, and veteran running back Andrew Harris isn’t worried about a potential drop-off in performance.

“I wouldn’t say a concern,” Harris said when asked about the team’s younger offensive line. “I thought that we had guys waiting in the wings to step up and play. The young guys … I think they’ve shown growth.”

Harris added after leading the league in rushing the past two years, a third consecutive title is in the back of his mind, but it’s not his biggest goal heading into the season.

“It’s definitely in the back of my head. The biggest thing in my head right now is winning the Grey Cup and doing whatever I can do to help our team get there. If that means rushing for more than 1,000 yards and being the rushing leader, so be it. But the main goal is to be on Portage and Main with the Cup and that’s not going to change.”