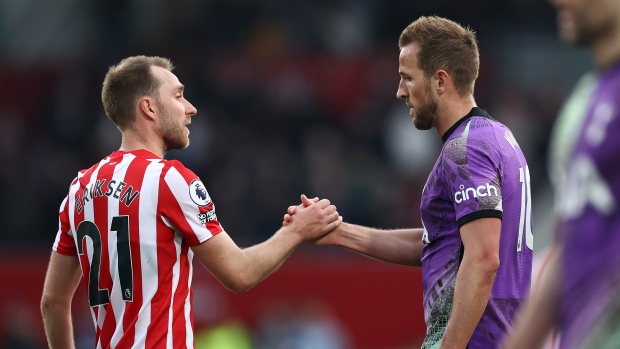 The 30-year-old Denmark midfielder's short-term contract with the Bees, signed after his return from a cardiac event at Euro 2020, expires at season's end with a number of teams said to be interested in his services.

"I know I am optimistic, but I also picked up the phone and said, 'Hey, do you want to come to Brentford?'" Frank said at his press conference ahead of the team's final match of the season against relegation-threatened Leeds on Sunday.  "No one thought about that six months ago. I would love to say 100 per cent, but I am convinced there is a good chance he can wear the Brentford shirt."

Brentford, in their first ever Premier League season, has won six of the eight games that Eriksen has started and only lost one. In 10 league games this season, Eriksen has one goal and four assists.

Frank believes that whatever happens, Eriksen is in great shape moving forward.

"Either he signs with us and everyone is going to be happy and the fans will build a statue of him outside the stadium in two or three years' time, or he goes to a bigger level and fans will applaud him and we will all say, 'Thank you for this time, go forward'," Frank said.

Eriksen, who previously played at Ajax, Tottenham Hotspur and Inter, has been attached with a move to Manchester United and Newcastle, as well as a return to Spurs.