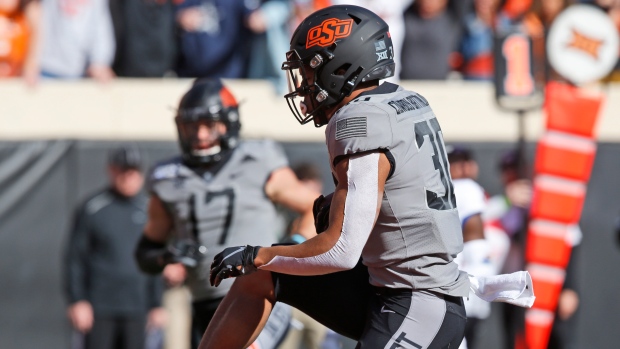 STILLWATER, Okla. -- Chuba Hubbard ran for 122 yards and two touchdowns, and No. 25 Oklahoma State rolled past Kansas 31-13 on Saturday.

Dillon Stoner caught five passes for a career-high 150 yards and two touchdowns and Spencer Sanders passed for 168 yards and a touchdown for the Cowboys (7-3, 4-3 Big 12, No. 22 CFP), who won their third straight.

It was the first meeting between Kansas coach Les Miles and Oklahoma State coach Mike Gundy. Gundy was Miles' offensive coordinator at Oklahoma State from 2001-2004 before Miles left to become head coach at LSU and Gundy took over as head coach for the Cowboys.

Hubbard scored his first touchdown just over three minutes into the game. He ran for 100 yards and two touchdowns in the first half to help Oklahoma State take a 24-0 lead.

In the third quarter, backup quarterback Dru Brown threw a perfect strike for a 43-yard touchdown to Stoner to push the lead to 31-0.

Kansas: The Jayhawks were routed for the third time this season. They had lost just 50-48 to Texas earlier in the year and had been close in two other losses. On Saturday, the Jayhawks got off to a rough start and never got into the game.

Oklahoma State: The Cowboys' defense has been a weaker link than the offense over the years, but the unit was dominant against the Jayhawks. The Cowboys allowed just 290 total yards, including 39 rushing.

The Cowboys did what was necessary to remain a ranked team.