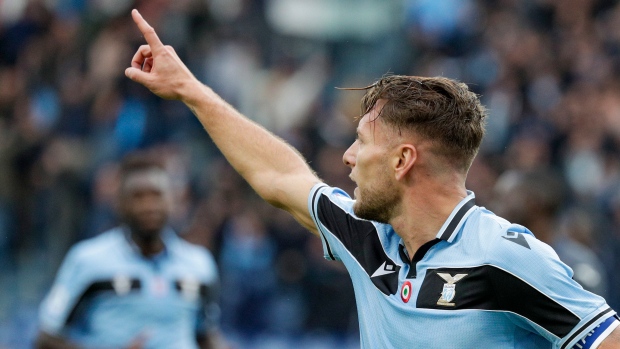 MILAN — Ciro Immobile scored a hat trick on Saturday to help Lazio crush Sampdoria 5-1 as Simone Inzaghi’s side continued to look like a genuine title contender.

It was a club record-extending 11th straight Serie A win for Lazio and saw the team close within three points of leader Juventus, and one behind second-place Inter Milan.

Lazio will be full of confidence ahead of a tough week. It faces Roma in the capital derby next weekend after continuing its defence of the Italian Cup against Napoli.

“We’ll enjoy this 11th win but we have to already be thinking about the next matches,” Inzaghi said. “We know what a derby means but I can’t allow myself to think about Roma.

“We play Napoli on Tuesday, we know what the Italian Cup means for us, what it meant last year, we have it on our shirts and we will fight for it again.”

Immobile has 23 league goals this season, nine more than any other player — and three more than Sampdoria's overall total.

“We would need too much time to count his records,” Inzaghi said. “We are talking about an extraordinary team player. He has shown that so many times. Immobile has been doing extraordinary things for four years, I’m not surprised.”

It was a miserable 23rd birthday for Sampdoria goalkeeper Emil Audero.

“Lazio was too good for us, you could clearly see the difference between the two teams, but it was without doubt the worst Samp performance since I’ve been here.”

Lazio dominated from the start and was 3-0 up inside 20 minutes.

Immobile also had a hand in the opener as Audero could only parry his effort, allowing Felipe Caicedo to tap in the rebound.

Immobile, who turns 30 on Monday, then converted a penalty following Nicola Murru's handball, and doubled his tally three minutes later.

Sampdoria managed to hold Lazio at bay for the remainder of the first half but substitute Bastos extended the home side’s lead nine minutes into the second period, shortly after coming off the bench.

Immobile completed his hat trick with another penalty, in the 65th, after Omar Colley handled.

Karol Linetty grabbed a consolation goal but Sampdoria's misery was complete three minutes later when defender Julian Chabot was shown a straight red card for a foul on Lazio forward Bobby Adekanye as he was running clear on goal.

The 19-year-old Vlahovic had scored three impressive goals already this season and he added to his collection in the 74th minute.

Vlahovic collected a cross-field pass on the right flank, took one look up as he cut inside and curled the ball into the far side of the net.

Federico Chiesa had given Fiorentina the lead in the 26th, finishing off a delightful team move with a low shot into the bottom left corner.

Lorenzo Insigne hit the post for Napoli early in the second half.

Fiorentina moved up to 13th, level on points with Napoli, which has lost four of its five league matches under Gennaro Gattuso.

Jeremie Boga also scored a spectacular effort to help Sassuolo come back from a goal down to beat Torino 2-1.

Boga gathered the ball near the halfway line, beat two Torino players, before unleashing a shot from 25 yards straight into the top right corner.

The 23-year-old Boga also set up what was to prove the winner for Domenico Berardi in the 73rd.

Manuel Locatelli scored an own-goal in the first half to give Torino the lead.

Teenager Vincenzo Millico also hit the crossbar late on but Sassuolo held on to snap a run of three consecutive defeats and move eight points away from the drop zone.

Torino remained eighth ahead of the rest of the weekend’s fixtures.