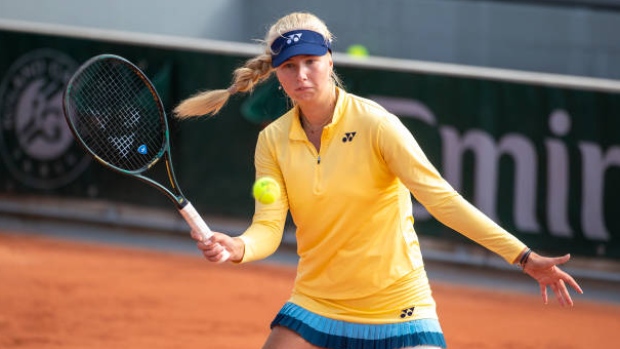 As an added bonus, the 139th-ranked Tauson will break into the Top 100.

“I’m going to believe it when I see it,” Tauson said after her win. "When I play like this I think I can beat some really good players. I’ve worked so hard for this. When I came here I was a qualifier, I didn’t expect this of course.”

Feeling tense before the final, she called her father.

“He’s at home in Denmark. I spoke with him before the match to calm my nerves,” Tauson said. “It’s been a weird week. I still haven’t processed it."

The match between the two qualifiers was even until Tauson reeled off six straight games, after Golubic had broken back to trail 5-4 when Tauson served for the first set.

The 18-year-old Tauson broke straight back to take it and was 5-0 up in the second when her Swiss opponent finally won another game.

“I think I played aggressive, I played my game even though I missed a few balls," Tauson said. “She always gives you one more shot to play, and with my game that’s quite annoying. But in the second set when I had a short ball I finished it, and that made the difference.”

Tauson entered the final with a strong advantage in serve, too, with 25 aces compared to just one for Golubic, and she added seven more to make it 32 overall at the tournament.

Golubic broke Tauson three times, only to drop her own serve six times.

Tauson is a former Australian Open junior champion and became the first Dane to top the world junior rankings in 2019. Her performance in Lyon is even more impressive considering she faced top-seeded Ekaterina Alexandrova in the first round.

The 28-year-old Golubic, ranked 130th, was in her third career final and first since losing at Linz, Austria, in October 2016. Golubic won her only career title in July that year, on home clay at Gstaad, and ended it with a career high ranking of 57.

She was two points away from defeat with second-seeded Fiona Ferro serving for the match in their semifinal on Saturday.

“It was a good week for me, a good run. (Tauson) was pretty solid in the final but I’m disappointed I couldn’t do a bit more," Golubic said. “She was really hitting big, hitting the lines all the time.”