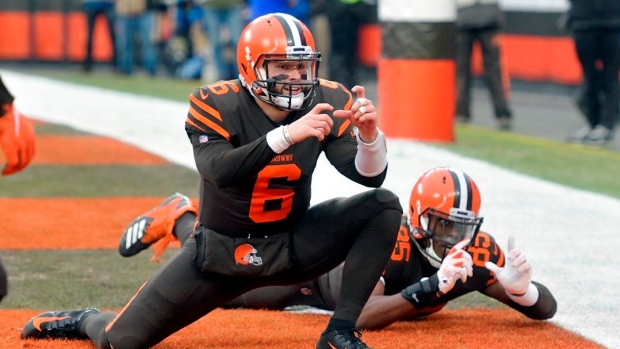 STREAKS, STATS AND NOTES — The Chiefs have won three straight and four of their last five against Cleveland. The teams have never met in the post-season. ... With a win, the Chiefs would be the first AFC team to host three consecutive conference championship games. ... The Browns are coming off their first playoff win since the 1994 season. ... The Browns' Kevin Stefanski will make his playoff head coaching debut Sunday after missing last week's wild-card game due to COVID-19. ... COVID-19 has wreaked havoc with the Browns in recent weeks. They were also missing Pro Bowl left guard Joel Bitonio and top cornerback Denzel Ward against the Steelers. Both are expected to play against the Chiefs. … Ward’s return along with CB Kevin Johnson (COVID) will help a secondary that gave up 501 yards passing to the Steelers. … The Browns have also been decimated by injuries. In the win at Pittsburgh, they lost G Michael Dunn and CB Robert Jackson -- Bitonio and Ward’s replacements -- to season-ending injuries. … ... Cleveland averaged 148.4 yards per game on the ground, the most for the franchise since 1978. ... Browns RB Kareem Hunt will face the Chiefs for the first time since they released him in 2018 after a video emerged of him shoving and kicking a woman. Hunt, who was suspended eight games for violent altercations, spent two seasons with Kansas City. He led the NFL in rushing as a rookie in 2017. … Browns RB Nick Chubb is the first player since Miami’s Mercury Morris in 1972 to rush for at least 1,000 yards and scored 12 TDs on 190 or fewer attempts. ... Chubb had 76 yards rushing, 69 yards receiving and a TD against the Steelers. He’s been over 100 yards from scrimmage in three straight games with TD runs in six of his past seven. ... Cleveland QB Baker Mayfield threw for 263 yards with three touchdowns and no interceptions last week in Pittsburgh. He has not thrown an interception in his last five games. ... WR Jarvis Landry has caught a TD pass in five consecutive road games, including last week's win. ...Cleveland turned over the Steelers five times with a turnover of its own last week. The Browns are 11-0 when they win or tie the turnover battles. ... The Chiefs are defending their first Super Bowl title in 50 years. They won their fifth straight AFC West title while winning 14 regular-season games for the first time in franchise history. ... The Chiefs tied a league-high with seven players picked for the Pro Bowl. ... Chiefs coach Andy Reid would tie the Steelers' Chuck Noll for the fifth-most post-season wins with his 16th on Sunday. ... Kansas City led the NFL in total offence at 415.8 yards per game. ... Kansas City allowed 22.6 points per game, fifth best in the AFC. ... Chiefs QB Patrick Mahomes was second in the NFL with 4,740 yards passing and fourth with 38 TD passes despite sitting out Week 17. ... Mahomes has 13 touchdowns and no interceptions in four post-season starts at Arrowhead Stadium. He has thrown at least two TD passes in four straight post-season games. ... Chiefs RB Clyde Edwards-Helaire was fourth among rookies with 1,100 yards from scrimmage despite missing three games to injuries. ... The Chiefs' Tyreek Hill was second among WRs with 17 total touchdowns this season. He has at least one touchdown and 60 yards receiving in his last two playoff games. ... Unanimous All-Pro Travis Kelce had 1,416 yards receiving in 15 games, the most in a season by a TE in NFL history. He has four touchdown receptions in his last three post-season games. ... Kelce has 632 yards receiving in the playoffs. He needs 109 to pass Brent Jones for fifth most among TEs. ... Chiefs SS Tyrann Mathieu had a career-high six interceptions this season. ... Fantasy tip: This should be a high-scoring game, so any of the skill position players are worth having active.