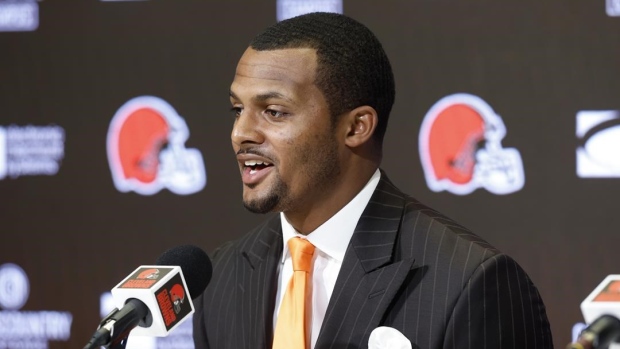 A person close to Watson tells Maske that the league will "probably" lobby for a one-season suspension for the 26-year-old pivot. While a league source suggests that it's too early to pinpoint an exact length for the ban, “Significant would be the proper term" for it.

Watson was traded from the Houston Texans to the Browns in March and immediately signed a five-year, $230 million deal with his new club with all of the money guaranteed, a new NFL record.

The Gainesville, GA native currently faces 24 civil lawsuits from women alleging sexual misconduct, mostly arising from massage therapy sessions. While Watson will not be criminally charged, an NFL investigation is ongoing and its findings will be given to Sue L. Robinson, a former U.S. district judge who has been jointly appointed by the league and the NFL Players' Association as a disciplinary officer.

Watson met with the media earlier in the week and once again denied any wrongdoing.

A person with knowledge of the situation tells Maske that the league hopes for the investigation and subsequent discipline to be concluded ahead of training camp with the Browns set to open their camp on July 27.

Maske notes that Manhattan District Attorney's Office sex crimes unit chief Lisa Friel is leading the league investigation into Watson's conduct and recently made a presentation to both the NFLPA and Watson's camp, including attorney Rusty Hardin, that led those close to the quarterback believe that the league is seeking a steep penalty.

CBS Sports' Josina Anderson reported last month that the league is mindful of the public reaction to the two-season suspension levied to Los Angeles Dodgers pitcher Trevor Bauer by Major League Baseball over a violation of the league's sexual assault and domestic violence policy. Like Watson, Bauer was not criminally charged

NFL source on Trevor Bauer: "Look at what baseball did. If people don’t think that's on people's radar, then. Public opinion matters. You think the NFL wants to be the organization that says sexual misconduct against women means more to one league than the other? Think about it."

"Look at what baseball did," a source told Anderson in May. "If people don’t think that's on people's radar, then. Public opinion matters. You think the NFL wants to be the organization that says sexual misconduct against women means more to one league than the other? Think about it."

Maske also notes that the length of Bauer's bans could affect the public expectation for potential discipline for Watson.